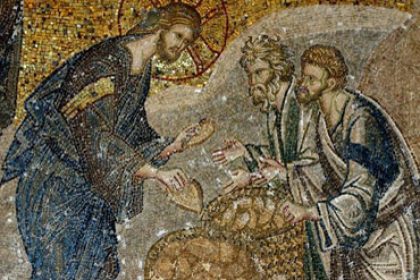 After this Jesus went to the other side of the Sea of Galilee, also called the Sea of Tiberias. A large crowd kept following him, because they saw the signs that he was doing for the sick.  Jesus went up the mountain and sat down there with his disciples.
Now the Passover, the festival of the Jews, was near. Jesus. When he looked up and saw a large crowd coming toward him, Jesus said to Philip, “Where are we to buy bread for these people to eat?”  He said this to test him, for he himself knew what he was going to do.  Philip answered him, “Six months’ wages would not buy enough bread for each of them to get a little.”  One of his disciples, Andrew, Simon Peter’s brother, said to him, “There is a boy here who has five barley loaves and two fish. But what are they among so many people?”  Jesus said, “Make the people sit down.” Now there was a great deal of grass in the place; so they sat down, about five thousand in all.  Then Jesus took the loaves, and when he had given thanks, he distributed them to those who were seated; so also the fish, as much as they wanted.
When they were satisfied, he told his disciples, “Gather up the fragments left over, so that nothing may be lost.”  So they gathered them up, and from the fragments of the five barley loaves, left by those who had eaten, they filled twelve baskets.  When the people saw the sign that he had done, they began to say, “This is indeed the prophet who is to come into the world.”
When Jesus realised that they were about to come and take him by force to make him king, he withdrew again to the mountain by himself.

In this story everything is on a huge scale.  Even the setting for the story is immense: it is the first mention of Jesus crossing the sea of Galilee.  At the far side is a wide space where “a huge crowd” can gather.  Jesus feeds the thousands; they not only have plenty, they have twelve baskets of bread left over.

It all speaks to us about immensity, about abundance: not the kind of abundance that comes from careful gathering and accounting (the people had come with no food); still less the kind that comes from defrauding one’s neighbours; but the abundance of God’s providence.  “Lifting up his eyes, he saw the crowd…” (verse 5).  It seems he wants us too to lift up our eyes, and not to live our lives by addition and subtraction  when he is able to multiply goodness towards us.

Contrasted with the immensity of everything in that scene is the poverty of resources: five barley loaves and two fish to feed thousands of people.  Why this sharp contrast?

Miracles seem to happen in situations of scarcity rather than plenty.  Why?  Because where there is plenty there is no need of miracles!  Where there is plenty you don’t have to struggle, you don’t have to come up against realities too painfully, you ease your way through everything with a cheque-book.  But in the story they had almost nothing.  There were only five loaves to feed thousands; and they were barley loaves.  This was the cheapest kind of bread; in fact barley was really considered animal-feed.  It is only the very poor who would eat barley loaves.  To be poor is to have no resources.  That can have one of two effects: it can turn people in on themselves, filling them with resentment and self-pity; or it can turn them outwards to a real experience of God’s Providence.  Poverty can  break people’s spirit, that is why it is so urgent to fight against it.  But equally, or more so, riches can destroy the human spirit, muffling it against reality and against God.  Here is a rule of thumb: if you want a miracle, give something away, to make room for it.

In John’s gospel there is no account of the institution of the Eucharist at the Last Supper.  Instead, Jesus washed the disciples’ feet, and said, equivalently, “Do this in memory of me.”  It is another kind of communion.  Without that communion which is the service of others, the communion of the Eucharist is robbed of its fruit in one’s life.

Disciples in every century have continued to recognise him in service of others and in “the breaking of bread.”