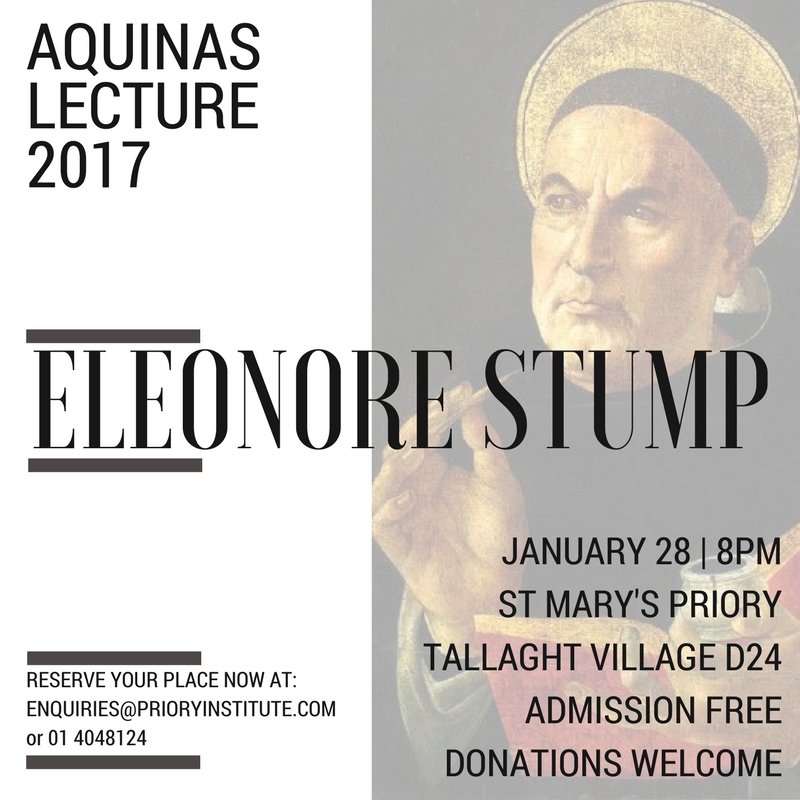 Eleonore Stump is a Professor of Philosophy at Saint Louis University, where she has taught since 1992.

She has published extensively in philosophy of religion, contemporary metaphysics, and medieval philosophy. For many years she worked closely with Norman Kretzmann, a collaboration that resulted in several significant publications, culminating in her book, Aquinas (Routledge, 2003). Fergus Kerr reviewed this work in the following glowing terms: “This book is an astounding achievement. It will not be superseded for decades. It will surely remain on the bibliography for as long as Thomas Aquinas is regarded as a major thinker, for as long then as there is Western philosophy.” In summary, he wrote: “sticking firmly to the analytical style of expounding

Aquinas, Eleanore Stump offers a very lucid exposition of Aquinas’s metaphysics, theory of knowledge and virtue ethics which keeps allowing his Christian theological commitments to shine through, without allowing them to swamp or occlude his genius as a philosopher. In the end, of course, Aquinas was a Christian, as few great philosophers have been; yet, as this splendid book convincingly shows, he deserves his place among the most important of Western philosophers.” (Ars Disputandi 4 2004, http://www.ArsDisputandi.org).

More recently she has published an extensive treatment of the problem of evil, Wandering in Darkness: Narrative and the Problem of Suffering (Oxford, 2010), incorporating her Gifford Lectures (Aberdeen, 2003), Wilde lectures (Oxford, 2006), and Stewart lectures (Princeton, 2009). She is past president of the Society of Christian Philosophers, the American Catholic Philosophical Association, and the American Philosophical Association, Central Division; and she is a member of the American Academy of Arts and Sciences. She is currently serving as the President for the Philosophers of Jesuit Education, and, with John Greco, is leading a project on “The Philosophy and Theology of Intellectual Humility”.

You can find a number of video lectures and interviews with her on YouTube on such topics as, “The God of the Bible and the God of the Philosophers”, “The Problem of Evil and the Desires of the Heart”, etc., but why not come and meet her yourself in person on January 28th. At the Priory Institute, Tallaght, Dublin 24.