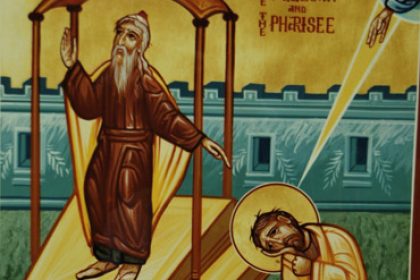 “He also told this parable to some who trusted in themselves that they were righteous and despised others” — Luke does not spell out the group to which he is speaking but it is quite clearly the Pharisees. See also Lk. 16: 14–16

Like the previous section (Lk. 18: 1–8), Luke declares his intention in writing this personally composed parable. He is writing about some people who presumed that their salvation was assured and this made them take it for granted that they were holy and so they looked down on others. Why they presumed this will be explained in the following verse.

“Two men went up into the temple to pray” — The devout prayed in the Temple especially at 9.00 a.m., 12.00 noon and 3.00 p.m. They could pray at other times also but these were the three most popular times.

“one a Pharisee” — The Pharisees formed a movement of devout, religious, observant lay men. As can so often happen, they went to excesses and many abuses crept in that gave the group a bad name. In the Gospels many of them were the most persistent opponents of Jesus, and he often criticized their attitudes and behaviour. They sought honours from others since they posed as good, outstanding, religious people. They prayed standing up and a little apart to be seen by others.

The Pharisee in this parable thanked God because he did not see himself as like others and he added a list of public sinners, thieves, dishonest, adulterous, whom he despised because of their life–style. His prayer was nothing other than self–praise and the good things he did: as we will see, he fasted twice a week even though the Law prescribed but a single day’s fast each year (Lv. 16: 29–31) and he paid tithes on all he acquired which was not even close to the exact prescription of the Law.

“and the other a tax collector” — The Roman invaders of the Holy land collected their taxes by employing whom they called “tax collectors”. These were local Jewish men who bargained for the right to collect the amount the Romans wanted and then added a substantial surplus as their earning. The people despised them because they presumed that they overcharged to accumulate wealth for themselves. They also despised them because they were collaborating with the Romans.

“The Pharisee stood” — Standing was the customary posture for prayer. The tax collector also stood (verse 13). Luke describes both men as standing from different motives. He suggests that the Pharisee took up a prominent position slightly apart from others that would make him conspicuous.

“and prayed thus with himself” — This does not mean that he prayed silently but that the prayer did not go towards heaven and God but to himself. Instead of praising God for his mighty works performed in and through him, the Pharisee praised himself for what he had achieved personally. He was aware of his good qualities and successes and he attributed these to himself.

“‘God, I thank thee that I am not like other men, extortioners, unjust, adulterers’” — Jesus has already accused Pharisees of being “full of extortion” (Lk. 11: 39), “lovers of money (Lk. 16:14). Luke adds the accusation of adultery.

“‘I fast twice a week, I give tithes of all that I get.’” — The Law prescribed but a single day’s fast each year (Lv. 16: 29–31). The Pharisees fasted every Monday and Thursday, the market days when there were many country people in the city whom the Pharisees hoped to impress. The Pharisee paid more tithes than the Law prescribed. He was full of praise for himself.

Jesus was very harsh in condemning them: “You are those who justify yourselves in the sight of others; but God knows your hearts; for what is prized by human beings is an abomination in the sight of God.” (Lk. 16: 15)

“But the tax collector, standing far off, would not even lift up his eyes to heaven, but beat his breast” — The tax collector did not regard himself as worthy to even look towards heaven where God was. There are four indications of his humility and sorrow: (i) He stood apart from everybody not to be seen but because he did not regard himself as worthy to mix with others, and (ii) gave the gestures of repentance, striking his breast, and (iii) casting down his eyes.

“saying, (iv) ‘God, be merciful to me a sinner!’” — The last words in the translation should read “the sinner”. The tax collector was truly humble in classifying himself as the great sinner.

“‘I tell you, this man went down to his house justified rather than the other;’” — According to Greek syntax the meaning is that it is God who justified or cleansed him.

“for every one who exalts himself will be humbled, but he who humbles himself will be exalted.” — Everyone who boasts about his own good qualities will be exposed to the truth and he who is self–effacing will have the truth expressed. The tax collector was forgiven; the Pharisee was not.

In this Gospel reading, Jesus develops his teaching on prayer and its ingredients. By means of a parable, he treats of the spirit people should have when they pray. We have already been told that faith and perseverance are two of the essential requirements of prayer. Now the following is added, “The sacrifice acceptable to God is a broken spirit; a broken and contrite heart, O God, you will not despise. (Psalm 51: 17). “Clothe yourselves, all of you, with humility towards one another. For ‘God opposes the proud, but gives grace to the humble’” (I Peter 5: 5; James 4: 6). Contrition or sorrow and humility are added as virtues that must be brought to prayer. “God, be merciful to me a sinner!” The Church continues to make this prayer its own: Kyrie eleison!: “Lord, have mercy!”

“Prayer is the raising of one’s mind and heart to God or the requesting of good things from God.” But when we pray, do we speak from the height of our pride and will, or “out of the depths” of a humble and contrite heart? He who humbles himself will be exalted; humility is the foundation of prayer. Only when we humbly acknowledge that “we do not know how to pray as we ought,” are we ready to receive freely the gift of prayer. “Man is a beggar before God.” (Catechism of the Catholic Church, 2559).

The first movement in prayer is to acknowledge that one is a sinner, is truly sorry, needs forgiveness and begs for this. That is true humility. Such was that excellent prayer of the tax collector. As the Catechism of the Catholic Church reminds us, “Asking forgiveness is the prerequisite for both the Eucharistic liturgy and personal prayer” (CCC, 2631). The Jesus’ Prayer is the perfect expression, echoing the invocation of the tax collector and the blind man at Jericho, “Lord Jesus Christ, Son of God, have mercy on me a sinner.” Unlike the Pharisee, the tax collector recognises and admits his personal unworthiness and expresses his sincere sorrow for his attitude of sin. He begs for mercy and pardon in a most humble manner. He wins God’s forgiveness. Suppliant repentant prayer won for him forgiveness because it expressed perfectly his sincere love for God. St. Francis de Sales gives excellent advice to us on this point, “We all ought to have very many such ejaculatory prayers, said as an act of loving repentance and with a desire of obtaining reconciliation with God, so that by thus laying our tribulation before our Saviour, we may pour out our souls before and within his pitiful heart, which will receive them with mercy” (St. Francis de Sales, “Treatise on the Love of God”, Book 2, Chapter 20).

It is most beneficial to have a spiritual director or directress for one’s prayer life.