The Works of Lent

The Works of Lent 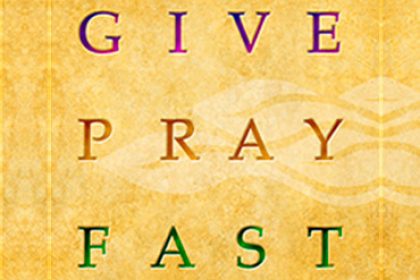 THE WORKS OF LENT

I may be wrong but I think that when the majority of people think of Lent they are inclined to consider that season as ascetical, The question pops up almost immediately: ‘What are you going off for Lent?’. There is nothing wrong with that but it shows that the mentality of so many is to identify Lent as purely penitential, rather than a way to live as a Christian throughout the entire year. Indeed it is a very good thing to have a particular period during the year when people try to live the Christian life in its fulness with, perhaps, the desire to live throughout the whole year as Lent is lived – giving oneself to God completely. My experience would be that very many people undertake works of asceticism during Lent and continue for long periods, perhaps for the rest of their lives. That can be extremely beneficial for them.

One of the big problems for many people with Lent is that they concentrate, perhaps too much, on external penances and not enough on remembering that Lent is essentially an exercise of the heart. Our obligation is to put our hearts into the exercises of Lent, This is not neglected but with the external exercises receiving the attention they are given, the heart can be allowed spend too much time in the background.

When I was still at school pocket-money was not plentiful and so there were not that many items we could “go off” for Lent; we were seldom “on them”. That was a great challenge for us to find something worthwhile to do for Lent. With the enthusiasm of youth and the competition from almost all others challenging us, we did do several penances and felt very good that we were giving Jesus our hearts, Our main exercises fell under three headings: Fasting, Prayer and Almsgiving. These were known as “the works of Lent”.

Everyone could practise them and the Church had rules to be observed by people of fourteen years of age and older when it came to abstinence so this was not a major problem.

Everyone could pray and so many attended various devotions provided in Churches.

The almsgiving may not have been too generous but the satisfaction in giving even a little was a wonderful sensation. The rules concerning fasting have since been modified by church authorities,

Prayer devotions have been reduced considerably but the almsgiving is quite generous and people have to be complimented on their present-day generosity.

Pope Francis is promoting the re-introduction of the Corporal and the Spiritual Works of Mercy. The immediate response to his initiative is very good and the prospects for the future are most encouraging. These two types of “works” are not novelties. Going back to my youth again, they were quite well-known but not widely practised. I have been very impressed by the Pope’s Lenten message for this year and I recommend that you read and reflect on it. It is found on one of these pages. Here are some short points he makes:

“Mercy expresses God’s way of reaching out to the sinner, offering him a new chance to look at himself, convert, and believe thus restoring his relationship with him. In Jesus crucified, God shows his desire to draw near to sinners, however far they may have strayed from him. In this way he hopes to soften the hardened heart of his Bride.”

Later he wrote: “God’s mercy transforms human hearts; it enables us, through the experience of a faithful love, to become merciful in turn. In an ever new miracle, divine mercy shines forth in our lives, inspiring each of us to love our neighbour and to devote ourselves to what the Church’s tradition calls the spiritual and corporal works of mercy. These works remind us that faith finds expression in concrete everyday actions meant to help our neighbours in body and spirit: by feeding, visiting, comforting and instructing them. On such things will we be judged. For this reason, I expressed my hope that “the Christian people may reflect on the corporal and spiritual works of mercy; this will be a way to reawaken our conscience, too often grown dull.”

The Holy Father has many more wonderful and encouraging sayings such as these. I leave you so that you may check them for yourself  The Holy Father is really trying very hard to make you a saint, the purpose of your conception and birth. Thank God!