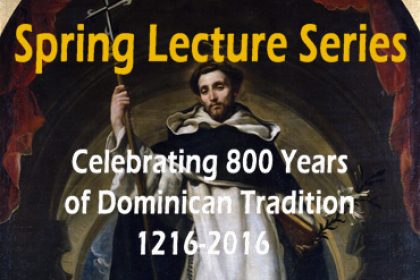 1. Dominic de Guzman: The Man, the Context and the Mission
John Littleton (17 February)

John Littleton is a priest of the Archdiocese of Cashel and Emly, and is Director of the Priory Institute, Tallaght, Dublin. Previously, he taught theology, religious studies and religious education in several colleges and institutes in Ireland and the UK. His main area of interest is contemporary Irish Catholicism. He is a well-known preacher and retreat director, and is a regular contributor to theological and pastoral journals. He served for six years (2001-2007) as President of the National Conference of Priests of Ireland.

2. From Catholic Guilt to Celtic Grá… on to Friendship with God? The Future of Dominican Preaching in Ireland
Vivian Boland OP (24 February)

Vivian Boland OP is a member of the general council of the Dominican Order at Santa Sabina, Rome. He has taught theology at the Dominican House of Studies in Tallaght, Dublin, at Saint Mary’s University in Twickenham and at Blackfriars in Oxford.

3. Wrestling with the Word: The Bible and Dominican Sholarship
Céline Mangan OP (2 March)

Céline Mangan OP studied oriental languages at University College, Dublin and scripture at the École Biblique, Jerusalem. She received the LSS from the Pontifical Biblical Commission, Rome. She has taught in various institutes, including University College Dublin and the Milltown Institute. She has wide experience in giving lectures, workshops and courses to a variety of groups and has written extensively on scriptural questions.

Liam G Walsh OP is a member of the Irish Dominican Province. He studied theology in Dominican Studia, at Tallaght (Ireland), at Le Saulchoir (France) and at the Angelicum (Rome). He has taught theology in Ireland, Rome and at the University of Fribourg in Switzerland. He served as Assistant for Studies to fr Vincent de Coeusnongle, Master of the Order 1974-1983. His writing has been mostly in the area of sacramental theology, and also on various aspects of the thought of Thomas Aquinas. He teaches at the Studium of the Irish Dominicans at Saint Saviour’s, Dublin. He is a member of the Board of Directors of the Priory Institute.

5. Meister Eckhart: “The Man From Whom God Hid Nothing”
Donagh O’Shea OP (16 March)

Donagh O’Shea OP has been director of the Dominican Retreat Centre, Tallaght, since 2007. He has had a long interest in Meister Eckhart and the other Rhineland mystics. His published works include a 4-CD set entitled ‘Meister Eckhart: The Man from Whom God Hid Nothing’.

6. Catherine of Siena: A Woman for Our Time
Mary O’Driscoll OP (6 April)

Mary O’Driscoll OP is a member of the Cabra Congregation of the Dominican Sisters. She completed a doctorate on Catherine of Siena and lectured at Rome’s Angelicum University for many years. She is a member of the Board of Directors of the Priory Institute.

Fergus Kerr OP was born 1931 in Banffshire, Scotland. After university and military service, he joined the Dominicans in 1956, and studied at Oxford, Paris and Munich. He published Theology after Wittgenstein (1986), After Aquinas: Versions of Thomism (2002), Twentieth-century Catholic Theologians: From Neo-Thomism to Nuptial Mystery (2006), and has been editor of New Blackfriars since 1995. He is based at Saint Albert’s University Chaplaincy, Edinburgh.

8. Pure Prayer in Painting: The Visual Homilies of Fra Angelico – Delight for the Eyes and Joy for the Heart
Michael Donleavy OP (20 April)

Michael Dunleavy OP is an Irish Dominican at present living in San Domenico di Fiesole, Italy. He is currently researching and writing a doctoral thesis on the Renaissance Dominican artist Fra Angelico, entitled “Epiphanies of Beauty”: Music Iconography and Its Spiritual Meaning in Selected Paintings of Fra Angelico.

Barbara Beaumont OP is a member of Mosteiro Pio XII, Fatima, Portugal. Since 2007, she has been founder member of SHOP (Association of Sister Historians of the Order of Preachers) in Fanjeaux, France, and has published in the area of Dominican history – particularly of Dominican women. Previously, she taught comparative literature at Leicester University and at the Open University.

Helen Alford OP is Professor of Economic Ethics and Vice Dean of the Faculty of Social Sciences at the Pontifical University of Saint Thomas (Angeli-cum) in Rome, where she also directs the Master’s programme in ‘Management and Corporate Social Responsibility’. She is interested in the philosophy of economics and business, and in how the Church can contribute to improving business practice.

No admission charge, but donations welcome