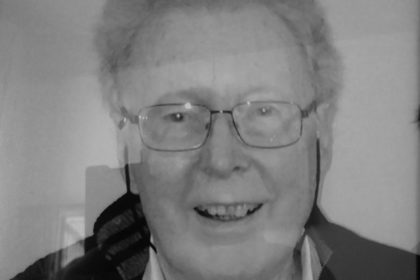 It is sad to inform you of the death of Fr Paschal Tiernan in Tallaght Hospital late on Sunday night (21st August). Paschal has been unwell for a number of years but handled it with his indomitable spirit.

The funeral arrangements are as follows:

Reposing in St. Mary’s Dominican Priory, Tallaght, from 9.30am on Wednesday 24th August

Removal to St. Mary’s Church, Tallaght, on Wednesday for 5.30pm.

May he rest in peace!

Today we would like to remember Paschal and thank him for his wisdom, enthusiasm and his commitment to preaching the Gospel.

He worked for 55 years in Trinidad, where he was greatly loved and admired. He was a very dynamic priest, always on the go, very well known and highly regarded as a preacher. People were impressed by both the content of his preaching and his lively way of communicating.

Because of the state of health he had to return to Ireland (Tallaght) in 2011. Though he missed Trinidad he accepted his new situation in a spirit of faith and kept working as best he could. Even up to recently, anytime we went into his room he was either working or saying his prayers. Maybe that was his most eloquent sermon at all – great grace with which he lived with poor health – uniting himself with Jesus in his suffering.

He was totally committed to evangelization. He wanted to use new ways of preaching making good use of new media such as internet or Facebook. We spoke many times about what to do to reach more people so that they can meet Jesus and his Gospel.

We will remember Paschal as a kind, generous, bosom friend.

A huge archive  of his meditations and commentaries will be our treasury, out of which we will try to bring knowledge and wisdom. We will still publish his commentaries written in last few years.

Thanks to his texts and also – we hope – his prayers for us he will stay with us for good.

Let’s in return remember him thankfully  in our prayers.

May Fr Paschal rest in peace!