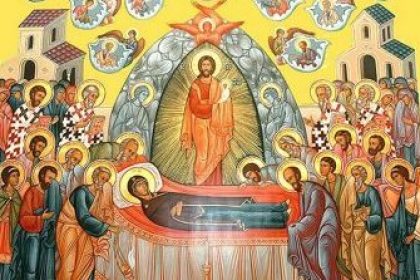 Muslims have a tradition that Mohammed was illiterate. It is a way of saying that the Koran was God’s production, not his. This tradition is similar, as far as it goes, to the Christian teaching about Mary’s virginity. One of the differences is that the normal way of nature requires only one author for a book, but two parents for a child. Muslims then can say that the Koran is not a human production at all, but Christians can say that Jesus is fully from God and also fully human. “Perfectus Deus, perfectus homo,” says the Athanasian Creed.

Human. What is human? Many say human when they mean human pride. When the Roman emperor Nero saw his immense palace—the domus aurea—finally completed, having burnt down part of the city to make way for it, he said, “Ah, at last a house fit for a man!” Many who are less extreme than he (there have been very few who were more) would still think of human life as consisting in some degree of success, power, recognition….

By every standard of the day, Mary was only barely human. She was not only female in a world ruled by men, she was unmarried (though betrothed); she was young in a world that valued age; she was poor in a world that saw poverty as God’s curse; she was a peasant remote from the centres of power. Yet the Liturgy calls her “the greatest honour of our race.” (Incidentally, did the person who composed that line forget about Jesus at that point?) ‘Human’ must mean something deeper than power, recognition, and the rest.

Far from it. As she crossed the hill country to visit her elderly cousin, she was not bearing a child for her husband. She was in the role of a prophet. “The Holy Spirit will come upon you, and the power of the Most High will overshadow you,” as later the Spirit would later overshadow Jesus at the Transfiguration (Lk 9:34), and the group of disciples in the upper room (Acts 1:8). In her, God is doing a new thing. She does not model conventionality and social compliance; she is in the line of Old Testament valiant women, as her Magnificat makes clear. In her the spiritual paradox of power and powerlessness is plain to see.