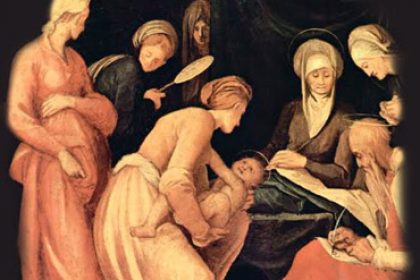 The time came for Elizabeth to give birth, and she bore a son. Her neighbours and relatives heard that the Lord had shown his great mercy to her, and they rejoiced with her. On the eighth day they came to circumcise the child, and they were going to name him Zechariah after his father. But his mother said, ‘No; he is to be called John.’ They said to her, ‘None of your relatives has this name.’ Then they began motioning to his father to find out what name he wanted to give him. He asked for a writing-tablet and wrote, ‘His name is John.’ And all of them were amazed. Immediately his mouth was opened and his tongue freed, and he began to speak, praising God. Fear came over all their neighbours, and all these things were talked about throughout the entire hill country of Judea. All who heard them pondered them and said, ‘What then will this child become?’ For, indeed, the hand of the Lord was with him. The child grew and became strong in spirit, and he was in the wilderness until the day he appeared publicly to Israel.

John the Baptist is like a first draft for Jesus.  They were alike in some ways: they were cousins, almost the same age; both emerged from the desert, urging people to a different way of life; both announced that events were coming to a head.  Jesus had called John the greatest man that ever lived (Lk 7:28), and he queued up with the crowds to be baptised by him.

Yet they were different.  Despite all his fire, John’s message in the end was rather conventional.  “Tax collectors came to be baptised, and they asked him, ‘Teacher, what should we do?’  He said to them, ‘Collect no more than the amount prescribed for you.’   Soldiers also asked him, ‘And we, what should we do?’ He said to them, ‘Do not extort money from anyone by threats or false accusation, and be satisfied with your wages.’” (Lk 3:12-14).  He was, you might say, a moralist.  Though there are still disciples of John the Baptist, the impact of Jesus on history has been infinitely greater.

Jesus is more than a moralist.  If he were only a moralist, he would be a very poor one, for his claims exceeded those of any moralist.  He claimed that he and the Father were one.  Any mere moralist making such a claim would not be credible for a moment.  We sometimes reduce him to a moralist.  But he alone was able to say, “The Kingdom (the Presence) of God is among you.”   This is much more powerful than all the moralism in the world.  An ounce of ‘is’ is better than a ton of ‘ought’.