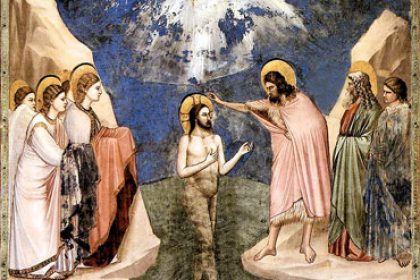 Jesus is there anonymously in the crowd, coming forward with the rest to meet the famous John the Baptist. It is impossible for us to see him as an anonymous person; to us he stands out from every crowd and from the whole human race: above them, beyond them; we can’t imagine him not yet majestic. But there he is, the village man, Jesus, known only to his family and neighbours. He’s not yet famous.

There is only one famous man there: John the Baptist. When we imagine a famous person among the crowds there is nearly always something false about it: he or she is looking for something, votes or applause or some other sort of ego-stroking. But John the Baptist isn’t looking for anything; he is delivering! He is delivering a verbal lashing of extraordinary severity, calling the crowd “a brood of vipers.” Jesus is there, watching, listening, anonymous. He is indistinguishable from the brood of vipers.  He is one of us. This is nothing new for him; this is how he has been all the thirty years of his life.

But this meeting with John the Baptist is a turning point. Something happened. He experienced the Spirit, and it is described in the kind of language that mystics have used throughout the ages to describe their union with God: “You are my son, the beloved.”

Have you ever known that in your very bones: that when God speaks to you he breathes, “You are my son, my daughter, the beloved?” If you experience God at all how could it be otherwise? ­God is love. Even the thundering 19th-century preacher, Spurgeon, became quiet in front of today’s gospel passage. He wrote: “The wings of the dove are as soft as they are swift. Quietness seems essential to many spiritual operations; the Lord is in the still small voice, and like the dew, His grace is distilled in silence.” The unshakeable intimacy with his Father that Jesus demonstrated throughout the rest of his life bears witness to his experience of God’s Spirit.

Was he now somehow ‘above’ the crowd? Would be no longer queue up with them? On the contrary. He was now more than ever one of them. He spent the rest of his life seeking out “the weak, the sick, the wounded, the strayed, the lost” (see Ezekiel 34).  He was for the lost sheep, the outcast, the sinner. This has ever since been the mark of true greatness.  Among us human beings (and not only in the farmyard) there is usually a well-enforced pecking order: people who climb up a step are sure to make it visible in some way and sometimes they will even move into a different circle of friends and abandon the old circle.  But Jesus never abandons the abandoned.  Again the mighty Spurgeon: “Gentleness is a sure result of the Spirit’s transforming power: hearts touched by Him are meek and lowly henceforth and forever.”

Can language convey this? I know a man who conveys it better than words ever could.  When he is talking with you (or, much more often, listening) and someone interrupts, he totally ignores the interruption.  His attention is unwavering.  Nothing else exists for him at that moment, and you know that he would stop at nothing to help you, and there is not the slightest hint of ego in it – he has no agenda of his own.  This is a rare quality.  People know instinctively that he is a man of God.  In case you’ve never met one, that’s what meeting a saint is like.