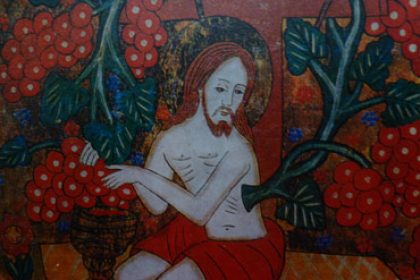 I am the true vine, and my Father is the vine-grower.  He removes every branch in me that bears no fruit. Every branch that bears fruit he prunes to make it bear more fruit.  You have already been cleansed by the word that I have spoken to you.  Abide in me as I abide in you. Just as the branch cannot bear fruit by itself unless it abides in the vine, neither can you unless you abide in me.  I am the vine, you are the branches. Those who abide in me and I in them bear much fruit, because apart from me you can do nothing.  Whoever does not abide in me is thrown away like a branch and withers; such branches are gathered, thrown into the fire, and burned.  If you abide in me, and my words abide in you, ask for whatever you wish, and it will be done for you.  My Father is glorified by this, that you bear much fruit and become my disciples.

In last Sunday’s gospel reading Jesus was the good shepherd and we the sheep.  Today’s image expresses an even closer relationship: a vine and its branches.  This is so close a relationship that you could say it is beyond relationship; it expresses identification.  “I am the vine…you the branches.”  But a vine is all branches!  It is not like a tree or a big shrub where you have a substantial trunk and then a profusion of branches.  The vine is just branches.  He has identified himself with us.  It is obvious that a branch cut off from the vine (or from any tree or shrub) will wither.  In the case of the vine, not only is the branch destroyed but the vine itself is diminished.  To destroy a branch is to destroy the vine in some measure; to cut off a brother or sister in Christ is to cut off Christ.

This is also the teaching of St Paul.  Christ, he said, is the head and we are the body. “We, who are many, are one body in Christ, and individually we are members one of another” (Romans 12:4); “Just as the body is one and has many members, and all the members of the body, though many, are one body, so it is with Christ” (1 Corinthians 12:12).

A favourite word in John’s gospel and letters is ‘abide’ (or the rather colourless translation ‘remain’): abiding in God, abiding in Christ, abiding in his word…. I counted thirty-seven.  To abide is not to be a visitor, it is even more than being a friend: it is to be at home.

It seems that no image can go far enough in expressing our union with Christ and God.  Meister Eckhart said, “If anyone put water in a barrel, the barrel would surround the water, but the water would not be in the barrel [i.e., it would not occupy the same space as the wood of the barrel], nor would the barrel be in the water.  But the soul is wholly one with God….In spiritual things there is no separating of one from another.”

I remember a magazine article some years ago, “After affluence, what?  Individualism”.   It was ever only a dream, of course – one that the world is waking up from now.  Nobody can really be an independent individual, least of all a wealthy person.  Wealth does tend to separate people from one another, while poverty often brings them together.  But then wealth traps people in a complex financial web with other people, a very caricature of closeness.  The dream of individualism is just a bad dream.  We depend on other people in a thousand ways.  Our Christian faith celebrates this and reveals its ultimate depth.  Even the Persons of the Trinity depend on one another.  To live, through Christ, in the heart of that mystery is our destiny.