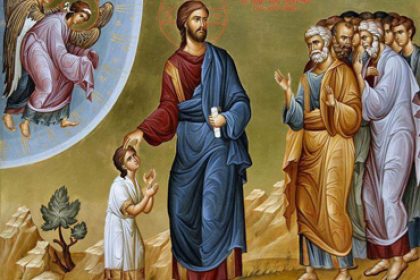 They went on from there and passed through Galilee. Jesus did not want anyone to know it; for he was teaching his disciples, saying to them, “The Son of Man is to be betrayed into human hands, and they will kill him, and three days after being killed, he will rise again.” But they did not understand what he was saying and were afraid to ask him. Then they came to Capernaum; and when he was in the house he asked them, “What were you arguing about on the way?” But they were silent, for on the way they had argued with one another who was the greatest. He sat down, called the twelve, and said to them, “Whoever wants to be first must be last of all and servant of all.” Then he took a little child and put it among them; and taking it in his arms, he said to them, “Whoever welcomes one such child in my name welcomes me, and whoever welcomes me welcomes not me but the one who sent me.”

St Augustine wrote: “Observe a tree, how it first reaches downwards so that it may then shoot upwards. It sinks its roots deep into the ground so that its top may reach towards the skies. Is it not from humility that it endeavours to grow? But without humility it will not reach higher. You want to grow up into the air without roots. That is not growth, but collapse.”

The disciples of Jesus had not yet reached this awareness. They were not above squabbling about rank, a little weakness that has hexed the clergy ever since. In this passage it says “they” were discussing; we can guess that James and John were in the thick of it, because in the very next chapter these two are asking for the best places in his Kingdom (10:35). It is the ego, the false self, that looks for promotion; the real self, the self that comes every moment from the hand of God, doesn’t need it or look for it. “If you are in love with precedence and high honour,” said St John Chrysostom, “pursue the humblest things, pursue being the least regarded of all, pursue being the lowliest of all, pursue being the smallest of all, pursue placing yourselves behind others.”

Religion often brings out the worst in people: hypocrisy, fanaticism and cruelty. Seeking preferment is not as serious a fault as these, but it is the next on the list. Jesus wanted on this occasion to be alone with the disciples, in peace and quiet, to give them a new teaching: about humility and suffering. This is the hardest lesson of all, and one that no one wants to hear, even though every mortal being is a sufferer. Jesus himself was to drain the cup of suffering to the dregs. “God had one son on earth without sin, but never one without suffering,” wrote St Augustine. This made the disciples’ squabbling for position look very shallow indeed. “What were you arguing about?” he asked. “They said nothing…” because they were ashamed. They suppressed their argument for the moment, and it looked as if the argument was over. But no, it would break out again later. By their very obtuseness they are teaching us something – just as a slow learner sometimes helps the whole class by slowing down the teacher.