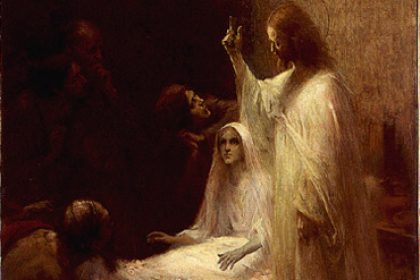 When Jesus had crossed in the boat to the other side, a great crowd gathered around him; and he was by the sea.  Then one of the leaders of the synagogue named Jairus came and, when he saw him, fell at his feet and begged him repeatedly, “My little daughter is at the point of death. Come and lay your hands on her, so that she may be made well, and live.”  So he went with him. And a large crowd followed him and pressed in on him.
Now there was a woman who had been suffering from haemorrhages for twelve years.  She had endured much under many physicians, and had spent all that she had; and she was no better, but rather grew worse.  She had heard about Jesus, and came up behind him in the crowd and touched his cloak, for she said, “If I but touch his clothes, I will be made well.”  Immediately her haemorrhage stopped; and she felt in her body that she was healed of her disease. Immediately aware that power had gone forth from him, Jesus turned about in the crowd and said, “Who touched my clothes?”  And his disciples said to him, “You see the crowd pressing in on you; how can you say, ‘Who touched me?'”  He looked all around to see who had done it.  But the woman, knowing what had happened to her, came in fear and trembling, fell down before him, and told him the whole truth.  He said to her, “Daughter, your faith has made you well; go in peace, and be healed of your disease.”
While he was still speaking, some people came from the leader’s house to say, “Your daughter is dead. Why trouble the teacher any further?”  But overhearing what they said, Jesus said to the leader of the synagogue, “Do not fear, only believe.” He allowed no one to follow him except Peter, James, and John, the brother of James.  When they came to the house of the leader of the synagogue, he saw a commotion, people weeping and wailing loudly.
When he had entered, he said to them, “Why do you make a commotion and weep? The child is not dead but sleeping.”  And they laughed at him. Then he put them all outside, and took the child’s father and mother and those who were with him, and went in where the child was.  He took her by the hand and said to her, “Talitha kum,” which means, “Little girl, get up!”  And immediately the girl got up and began to walk about (she was twelve years of age). At this they were overcome with amazement.  He strictly ordered them that no one should know this, and told them to give her something to eat.

This is an example of Mark’s ‘sandwiching’: in the middle of one incident he places another.  It gives remarkable pace to his story.

What is all the hurrying about?  Jesus is hurrying to save the life of a little girl, and he heals a sick woman on the way.  The first reading began, “Death was not God’s doing, he takes no pleasure in the extinction of the living.”  So Jesus is doing God’s work; he heals and he restores to life.

Watch how he does it.  There is great gentleness and warmth in these two stories. The speed and the pressure of expectations didn’t make him impersonal or mechanical, as it does many busy people.  His affectionate expression to the little girl, “Talitha kum!”, is retained in his own language, Aramaic. The New Testament is written in Greek, but the writers kept just a few phrases in Jesus’ own language: maranatha, and Abba and Talitha kum. Terms of affection translate poorly, because they are more than their dictionary meaning: they are warm words.  (I remember an ancient woman in my village who used to address everyone as a leanbh, ‘child’.)

Likewise, when the lady wanted a cure and touched his cloak rather than face him, he said, “Who touched me?”  He didn’t want her cure to be anonymous; he wanted to speak to her and heal her, not just relieve her symptoms.

“Who touched me?”  These are words to break through the stoutest walls of anonymity.  There is a kind of frigid atmosphere when people don’t know one another.  If they have to exchange words they use the minimum number usually: “Excuse me!” “Thank you!”  “Goodbye!”  There is seldom any real warmth in them, and the smile (if any) that goes with them looks a bit stiff.  But “who touched me?” breaks through all that.  We can be spontaneous with our friends because we know how they will react; but we don’t know how strangers might react, so we play safe; in a sense we hide ourselves.  The woman in the story wanted contact with Jesus, and at the same time she wanted the security of anonymity.  So in the press of the crowd she touched the hem of his cloak; she wanted an anonymous cure.  It is still very much with us today.  We are drawn to anything that promises us a cure.  You could make a list of them, from the more sensible to the less!  What is missing in many of them is a  Who to touch you: what we really need is a Son of God with fire of compassion in his eyes, who looks for you saying, “Who touched me?”  Or “talitha kumi!”  Or even “a leanbh!”