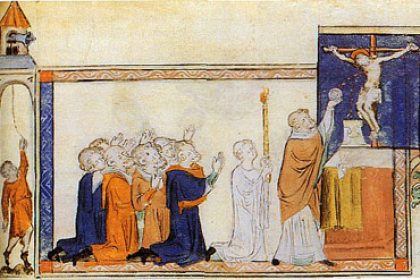 On the first day of Unleavened Bread, when the Passover lamb is sacrificed, his disciples said to Jesus, ‘Where do you want us to go and make the preparations for you to eat the Passover?’ So he sent two of his disciples, saying to them, ‘Go into the city, and a man carrying a jar of water will meet you; follow him, and wherever he enters, say to the owner of the house, “The Teacher asks, Where is my guest room where I may eat the Passover with my disciples?” He will show you a large room upstairs, furnished and ready. Make preparations for us there.’
So the disciples set out and went to the city, and found everything as he had told them; and they prepared the Passover meal.  While they were eating, he took a loaf of bread, and after blessing it he broke it, gave it to them, and said, ‘Take; this is my body.’ Then he took a cup, and after giving thanks he gave it to them, and all of them drank from it. He said to them, ‘This is my blood of the covenant, which is poured out for many. Truly I tell you, I will never again drink of the fruit of the vine until that day when I drink it new in the kingdom of God.’

There is a very precious early Christian document called the Didachè, discovered in its entirety only in 1873, though Christian writers through the ages always knew of its existence, and had passages from it that had been quoted by ancient writers.  It was written sometime between the years 50 and 100, and so it is even earlier than some of the New Testament.  It contains the very first use of the word ‘eucharist’.  It is very moving to read this and to imagine the lives of the Christians who spoke and heard those words in the infancy of the Church.

I remember that distant day when I ‘made my First Communion’.  I remember waking up, having nodded off during the Mass, to find my candle dripping grease.  But they had got on with things while I slept.  Looking back today I think: During the many years since that time, they have got on with lots of things while I slept.   And I have to admit that I’m not very repentant about it.  Some of the best things can happen to you while you sleep.  The Scriptures say that God “pours gifts on his beloved while they slumber.”  And Jesus said that the Presence of God (the “Kingdom of God”) is like seeds that a farmer scatters in his field and that grow even when he is asleep.  “Night and day, whether he sleeps or wakes, the seed sprouts and grows, though he does not know how” (Mark 4:27).  We ourselves grew like that, when we were in the womb, and during the early years of our lives.  By day and by night our mothers watched over us; we were so sure of them that we could go sound asleep when we knew they were around.  God mothers us too.

At the heart of that relationship, for Christians, is Jesus.  The great 14th-century mystic, Julian of Norwich, not only called God our ‘mother’, but she called Jesus our mother!  This may seem very strange, even weird.  But, as always, she meant something luminous, and she had profound reasons for saying it.  She did not mean that Jesus is like your mother.  She meant the reverse: your mother is like Jesus.  Your mother fed you from her own body.  Our mother’s care for us may well be the best image we have of God  –  and of Jesus.  [See this month’s ‘Wisdom Line’ on this website for a passage in which Julian calls Jesus ‘mother’.]