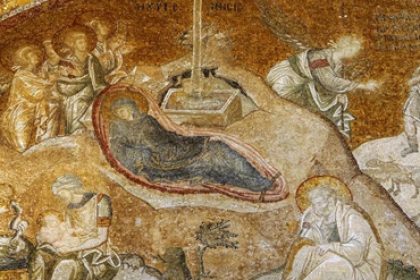 In the beginning was the Word, and the Word was with God, and the Word was God.  He was in the beginning with God. All things came into being through him, and without him not one thing came into being. What has come into being in him was life, and the life was the light of all people. The light shines in the darkness, and the darkness did not overcome it. There was a man sent from God, whose name was John. He came as a witness to testify to the light, so that all might believe through him. He himself was not the light, but he came to testify to the light. The true light, which enlightens everyone, was coming into the world. He was in the world, and the world came into being through him; yet the world did not know him. He came to what was his own, and his own people did not accept him. But to all who received him, who believed in his name, he gave power to become children of God, who were born, not of blood or of the will of the flesh or of the will of man, but of God. And the Word became flesh and lived among us, and we have seen his glory, the glory as of a father’s only son, full of grace and truth.

There is a kind of timelessness about Christmas: it takes us out of our routines; suddenly all the rush of preparation is over and there is nothing more to do.  This could be the moment to experience something different from the perpetual motion that is our ordinary life.  But what happens?  We turn on the TV, which is what we may have been doing every single evening since last Christmas.  No change.  Then we say Christmas is boring, or sad, or too commercial…. Of course it is; it is just like all the other days.  We have not allowed change to happen.  We have not allowed space for anything new to appear.  Paradoxically, all the flashing lights, the incessant television, the emailing and text-messaging…all have the effect of filling our lives and so leaving no space to move, no space for anything really different to appear; so we are enclosed in a cave of artificial lights that never lead us to the sun.

“The light shines in the darkness.”  But it does not shine in artificial light.  We have to turn something off.  We have to leave space and time for the new thing to appear.

The Child born today is God’s new deed: the newest, the youngest, the most recent…the latest.  But this is not announced in the excited voice of the advertisers; it is a silent deed.  He is the Word made flesh, but he lies there as helpless to speak as any infant.  Only in silence can this silent Word be heard.  The new blade of grass does not make a scene or a noise; neither does the Word made flesh.