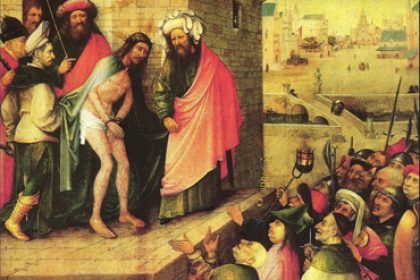 Pilate entered the headquarters again, summoned Jesus, and asked him, “Are you the King of the Jews?” Jesus answered, “Do you ask this on your own, or did others tell you about me?” Pilate replied, “I am not a Jew, am I? Your own nation and the chief priests have handed you over to me. What have you done?” Jesus answered, “My kingdom is not from this world. If my kingdom were from this world, my followers would be fighting to keep me from being handed over to the Jews. But as it is, my kingdom is not from here.” Pilate asked him, “So you are a king?” Jesus answered, “You say that I am a king. For this I was born, and for this I came into the world, to testify to the truth. Everyone who belongs to the truth listens to my voice.”

Do you know the word ‘Maranatha’? Don’t be too hard on yourself if you don’t: it is an Aramaic word. Aramaic was the language that Jesus spoke. Depending on how you pronounce it, it means “Come, Lord!” (marana-tha) or ‘The Lord is come’ (maran-atha).

‘Maranatha’ was an early Christian prayer for the return of Christ. St Paul used it in 1 Cor. 16:22. And it occurs in Rev. 22:20,21: “He who testifies to these things says, ‘Surely I am coming soon.’ Amen. Maranatha! The grace of the Lord Jesus be with you all. Amen.” Those are the closing words of the Bible. In 1883 an early Christian book called the Didachè was discovered, which caused immense excitement; it was written in the first century, and was an unexpected glimpse into the early days of the Christian faith. Among other things it contains an account of the Mass. I quote a small part. Look out for the word maranatha.
“Lord, remember your Church; deliver it from evil, perfect it in your love, sanctify it, and gather it from the four winds into the kingdom you have prepared for it.
Response: Yours is the power and the glory for ever and ever!
Let Grace [Jesus] come, and this present world pass away.
Response: Hosanna to the God of David!
Whoever is holy, let him approach. Whoever is not, let him repent.
Response: Maranatha. Amen.”
Did they say maran-atha, or marana-tha? Either would make sense, and the Christian faith needs both senses. The kingdom of God is here and simultaneously it is yet to come; it is present but not completed. The gospels tell us that “the kingdom of God is among you” (Luke 17:21). They also say that it is still to come: in the Our Father we say “May your kingdom come!” (Matthew 6:10).

The kingdom of God is already here in the sense that Jesus lives within and among us now. But we know also that his presence is obscured by the continued presence of evil in the world. Individuals and institutions are very far from being aligned on the will of God, and so the kingdom is incomplete. St Paul imagines Christ eventually handing over a perfect kingdom to God his Father (1 Cor. 15:24), but since it is not yet perfect, his ultimate triumph is delayed. Origen (born in 185 A.D.) wrote the following: “Christ said, ‘I will not drink wine until the day I drink the new wine with you in the kingdom of my Father’ (Matthew 26:29). For as long as we fail to rise to his level he cannot drink this wine all alone…. We delay his joy. Until I hand over my life to the Father his life is not fully handed over. Without you he cannot receive his full glory. Without you: that is, without his people, who are his body and his limbs.”

We are more inclined to think of the kingdom as still to come: a region beyond the grave. This is reinforced by the phrase ‘kingdom of heaven.’ The situation is even worse in some other languages, such as French and German, where the one word means ‘sky’ and ‘heaven’. We are tempted to think of God’s kingdom as being up there somewhere. That phrase ‘kingdom of heaven’ comes from Matthew’s gospel; the other gospels say ‘kingdom of God.’ Matthew was writing specifically for Jews, and Jews did not like to use the name ‘God’, out of respect. Instead, Matthew wrote ‘kingdom of heaven’. But this should not suggest to us that it is somewhere above the clouds. Christ wants to be king here, not king of the clouds.