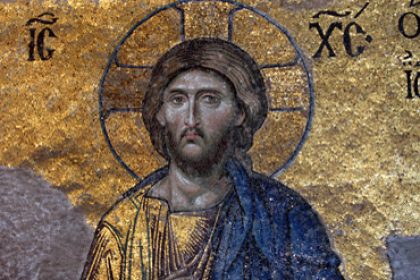 If you were born in a Republic the language of royalty is alien to you: kings, queens, princes, thrones, etc.  So we have a great deal of adjustment to do.  When the feast of Christ the King was introduced in 1925 there was polemical intent: it was a defiance of secular governments which were increasingly anti-clerical at the time.  It set up a principle of opposition between Christ and the world.  Good, if by ‘world’ you mean what the Scriptures mean (not the physical world but the structures of evil: the word ‘worldly’ retains some of this meaning).  But it is fatally easy to slip from a Christ/world opposition to a Church/world opposition, to imagine that because we are members of the Church we are automatically on the side of Christ.  In reality, many members of the Church often represent ‘the world’ far better than non-members do.  When the Jews of his day had a similar thought about themselves (thinking they were saved just because they were Jews, ‘children of Abraham’) Jesus said to them, “Do not think: ‘We have Abraham for our father.’  I tell you that God can raise children for Abraham from these stones!” (Matt 3:14).  Likewise, with us, being a Catholic puts us in no privileged position in relation to the world.  Like Jesus we have been sent into the world not to judge the world, but to save it (John 3:17).

“Yes, I am a king,” said Jesus (John 18:37).  So… can you see him sitting there displaying himself beside King Herod the Great, for example (one of the most vicious men who ever lived)?  No, no.  He was parodying the very idea of kingship. When he said “Yes, I am a king!” he was a prisoner standing before Pilate’s judgment seat!  “What is truth?” Pilate asked him, but got no answer.  (Matthew and Mark say that Jesus was silent before Pilate, and Luke says he was silent before Herod.)  How could anyone hear an answer to such a question while sitting on a throne of judgment?  When you are sitting on your throne of judgment don’t expect to come across any truths!

Objection!  In today’s Gospel reading he appears as a judge sitting on a throne!  And furthermore he puts the whole human race in just two categories!

(Can you put the whole human race in two categories: the good and the bad?  Surely there are shades of goodness and badness, and to ignore them is a great injustice.)

But that is not the point of the parable.  A parable makes only one point, but we often read parables as if they were allegories, that is, stories whose every single element points some moral.  No, the single point of today’s parable is that there can be no love of God without love of other people.

The English novelist and playwright John Galsworthy (known to many as the author of The Forsyte Saga) once complained that religion was now being replaced by service, “social service – the ants’ creed, the bees’ creed.”  But this is to make little of what today’s Gospel writes large.  Other passages in the New Testament make it equally clear: “Religion that God our Father accepts as pure and faultless is this: to look after orphans and widows in their distress and to keep oneself from being polluted by the world” (James 1:27).