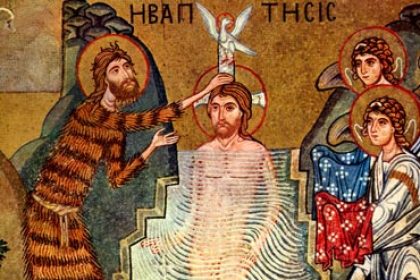 15 But Jesus answered him, “Let it be so now; for thus it is fitting for us to fulfil all righteousness.” Then he consented.

16 And when Jesus was baptized, he went up immediately from the water, and behold, the heavens were opened and he saw the Spirit of God descending like a dove, and alighting on him; 17 and lo, a voice from heaven, saying, “This is my beloved Son, with whom I am well pleased.”

“Then Jesus came from Galilee to the Jordan to John, to be baptized by him. John would have prevented him, saying, “I need to be baptized by you, and do you come to me?” — The baptism of John was not a sacramental baptism conferring absolution of sins but a sign of repentance for the forgiveness of sins. The model was the baptism of Ezechiel (Ez. 18: 30–32; 36: 25–28).

John recognised Jesus as the expected Messiah and so says that he cannot baptise Jesus who, in fact, should baptise him. Jesus is the greater; John, as he already said, is not worthy to be his slave.

15 But Jesus answered him, ‘Let it be so now; for thus it is fitting for us to fulfil all righteousness.’ Then he consented.

“But Jesus answered him, ‘Let it be so now;’” — Jesus does not deny John’s remarks but says that it is better, at this time, to do what he (Jesus) asked and let John baptise him.

“‘for thus it is fitting for us to fulfil all righteousness.’ Then he consented.” — He links John as an equal with him in this decision (“It is fitting for us”). He does not try to force him; he allows him make a free choice. His reason for this has to be explained: The early Church found it embarrassing that John, the lesser, baptised Jesus, the greater, and that Jesus, the sinless, came to be baptised from sins. Matthew deliberately does not say this but he adds verses 14 and 15 to show that John did not wish to baptise the Messiah and did so only when he said that he saw his baptism as fulfilling his Father’s will. Jesus’ remarks mean the following: We are going to make an exception now in this case because I wish to identify myself with sinners, and what they do, I will do. For example, I allowed myself to be circumcised and that means that I would do everything which the Law prescribed, such as being presented in the Temple, and also whatever would identify me with the people. I associated and ate with serious sinners, so why not undergo John’s baptism?

These are the first words of Jesus in Matthew’s Gospel. They are humble words as he identifies himself with sinners. That is the purpose of his coming into this world. His public ministry commences with his baptism and so he, the Second Person of the Blessed Trinity Incarnate, identifies with sinners from his first appearance.

16 And when Jesus was baptized, he went up immediately from the water, and behold, the heavens were opened and he saw the Spirit of God descending like a dove, and alighting on him; 17 and lo, a voice from heaven, saying, ‘This is my beloved Son, with whom I am well pleased.’”

“And when Jesus was baptized, he went up immediately from the water, and behold, the heavens were opened and he saw the Spirit of God descending like a dove and alighting on him;” — The heavens had been closed with the sin of the first man, Adam, and his wife, Eve. Now they are opened with the baptism of the second Adam, an act of doing God’s will perfectly as he carried on his own shoulders the sins of the world to be purified. This is how he can refer to his death on the cross as his second baptism (Lk. 12: 50).

Jesus was the only person who saw the Spirit descend on him.

By the Spirit descending on him, Jesus was anointed as Messiah.

“the Spirit descending like a dove” — It was not a dove that descended but “like a dove”. The dove is the symbol of gentleness and meekness. It is possible that the reference to the dove recalls the dove hovering over the waters at creation (Gn. 1: 2) to indicate that the dove, symbol also of the Holy Spirit, is present in a similar manner at the new beginning of Jesus’ public ministry and work of redemption.

“and lo, a voice from heaven, saying, ‘This is my beloved Son, with whom I am well pleased.’” — Obviously the voice belongs to the Father who speaks about his Son. These words are repeated at the Transfiguration (Mt. 17: 5).

“This is my beloved Son” is a quotation from Psalm 2; 7. It refers to the Messiah.

“with whom I am well pleased” is a quotation from Isaiah 42: 1, referring to the Suffering Servant.

The Trinity is present here with the Father and Spirit present to the Incarnate Son. The Father tells of his intimate relationship with his Son. The Incarnate Son mentions his identity with sinners. The Holy Spirit declares how he anointed Jesus as the promised Messiah. Jesus’ baptism is the model of Christian baptism. By Christian baptism one is related to each of the members of the Blessed Trinity and becomes a child of God, is anointed by the Holy Spirit, and obtains the forgiveness mediated through the Messiah.

The actual baptism of Jesus is not described; we are told that “when he was baptised”. This means that the baptism has not been highlighted. What is emphasised is that his Father in heaven identifies Jesus as his Son. Jesus now commences his public ministry, identified by the Holy Spirit as the Anointed Messiah, by the Father as the Son of God and he identifies himself with sinners.

“This is my beloved Son” — These words were not addressed to Jesus exclusively, otherwise they would have been, “You are my beloved Son”, as Mark records them. They show that Isaiah 42: 1 and 61: 1 were fulfilled.

(i)        “it is fitting for us” — Jesus is speaking to John. He is the greater yet he includes John in his action, not by commanding but by inviting him to join in doing God’s will. This shows Jesus’ attitude to working with others.

(iii)      “This is my beloved Son” — This statement is the highpoint of the narrative, not the baptism. Here God the Father identifies his Son who is commencing his public life and informing listeners and readers who Jesus really is.

The above three examples are given to show how carefully each word must be examined and prayed over to understand the full meaning of a passage.

Here now are ten, of many, texts in Matthew’s Gospel which indicate that the theme of “the Son of God” is a major theme in this Gospel.

The first two are linked because they say exactly the same, are spoken by God the Father and so are most important coming from such an authority, the highest: Mt. 3: 16–17, the Baptism of Jesus, and Mt. 17: 5, the Transfiguration on the Mount.

Mt. 3: 16–17 — “And when Jesus was baptized, he went up immediately from the water, and behold, the heavens were opened and he saw the Spirit of God descending like a dove, and alighting on him; and lo, a voice from heaven, saying, ‘This is my beloved Son, with whom I am well pleased.’”

Mt. 17: 5 — “He was still speaking, when lo, a bright cloud overshadowed them, and a voice from the cloud said, ‘This is my beloved Son, with whom I am well pleased; listen to him.’”

In Mt. 11: 25–27 — Here Jesus identifies himself as the Father’s special Son in three ways: he has received everything from his Father; only the Father knows the Son; only the Son knows the Father and those to whom the Son chooses to reveal him.

Mt. 14: 31–33 — Having seen Peter walk on the water during the storm, then doubt and begin to sink and Jesus rescue him, the other disciples recognised the miracle, plus the calming of the sea, and worshipped Jesus, saying ‘Truly you are the Son of God.’”

Mt. 16: 16 — When Jesus asked Peter, ‘who do you say that I am?’ Simon Peter replied, ‘You are the Christ, the Son of the living God.’ And Jesus answered him, ‘Blessed are you, Simon Bar–Jona! For flesh and blood has not revealed this to you, but my Father who is in heaven.’” Again a reference to the Father’s authority and will. After this Peter was appointed head of the apostles and the Church. This confession of faith by Peter shows that the first requirement for a person joining the Church must be faith in Jesus as the Son of God.

Next there are two parables, Mt. 21: 33–46, which tells of the tenants killing the son of the owner of a vineyard, and Mt. 22: 1–10, which tells of the father who prepared a feast for his son’s wedding but the guests refused to attend. The mention of father and son obviously refer to the heavenly Father and his Son.

Finally, Mt. 27: 54 — “When the centurion and those who were with him, keeping watch over Jesus, saw the earthquake and what took place, they were filled with awe, and said, ‘Truly this was the Son of God!’”

These are not the only references in Matthew’s Gospel to Jesus as Son of God. There are many more. The Infancy Narrative has many references. Subsequent narrative continues these. The culmination is the centurion’s declaration. Two are the Father’s voice from heaven; there could be no greater, indisputable authority claiming that Jesus is the Son of God.

Lest anyone claim that there is no difference between the sonship of Christians and that of Jesus, The Catechism of the Catholic Church states, “He distinguished his sonship from that of his disciples by never saying “our Father,” except to command them: “You, then, pray like this: ‘Our Father,’” and he emphasized this distinction, saying “my Father and your Father”. (Mt. 5: 48; 6: 8–9; 7: 21, CCC, 443).