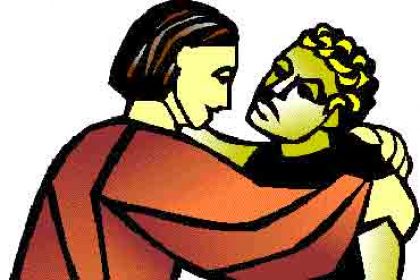 Jesus said, “I say to you that listen, Love your enemies, do good to those who hate you, bless those who curse you, pray for those who abuse you. If anyone strikes you on the cheek, offer the other also; and from anyone who takes away your coat do not withhold even your shirt. Give to everyone who begs from you; and if anyone takes away your goods, do not ask for them again. Do to others as you would have them do to you. If you love those who love you, what credit is that to you? For even sinners love those who love them. If you do good to those who do good to you, what credit is that to you? For even sinners do the same. If you lend to those from whom you hope to receive, what credit is that to you? Even sinners lend to sinners, to receive as much again. But love your enemies, do good, and lend, expecting nothing in return. Your reward will be great, and you will be children of the Most High; for he is kind to the ungrateful and the wicked. Be merciful, just as your Father is merciful. Do not judge, and you will not be judged; do not condemn, and you will not be condemned. Forgive, and you will be forgiven; give, and it will be given to you. A good measure, pressed down, shaken together, running over, will be put into your lap; for the measure you give will be the measure you get back.”

We should love our enemies. We should be pacifists. But pacifism is not another word for passivity. We are not called to be passive. Jesus was not passive, he was very active on the day he drove the traders and their animals out of the Temple: “Making a whip of cords, he drove all of them out of the temple, both the sheep and the cattle. He also poured out the coins of the money changers and overturned their tables. He told those who were selling the doves, ‘Take these things out of here! Stop making my Father’s house a marketplace!’” (John 2:15-16). (Incidentally, it does not say, as some translations suggest, that he used the whip on the traders.) Nor was he passive when he healed the man against the protests of the Pharisees: “He looked around at them with anger,” and then healed him (Mark 3:5). Passivity is a refusal to use one’s strength. But love is strong – “stronger than death.” There is a kind of passivity that pretends to be Christian love but is probably just cowardice.

‘Turning the other cheek’ is not so hard when the cheek is someone else’s. A false notion of Christian meekness has often been used to allow violence and abuse to go unchallenged. Do you tell children who have been abused that they should love their enemy? Do you tell the family of a murder victim to love the murderer? I should think you would have to pick your words very carefully, or remain silent. Turning the other cheek is for people who have the power to retaliate but choose not to do so. It is not for people who have no power, no choice. When Peter became violent, Jesus said to him, “Put your sword back into its place….Do you think that I cannot appeal to my Father, and he will at once send me more than twelve legions of angels?” (Matthew 26:53).

But when it is your own cheek, what do you do? What did Jesus do? He did not sink into passivity when the soldier struck him. He challenged him: “If I have spoken wrongly, testify to the wrong. But if I have spoken rightly, why do you strike me?” (John 18:23). The question is how you challenge your enemy (assuming that you have the power to do so). The instinct is to respond in kind, to react to violence with violence. We have to see that this is to make yourself exactly like your enemy. In that sense it is no challenge to him; it confirms his view that that is the way for a human being to act. Jesus met violence with reason, not with violence. The enemy doesn’t want to see your face or hear your voice. He wants to turn you into an object, and objects don’t have faces and voices. If you are only an object, then he finds it easier to take leave of his own humanity. We should not underestimate the power of sheer personal presence. We have to reach somehow behind the violence of the enemy and engage him as a human being. If we can just hold off, he may see the insanity of what he is doing.

God does not respond to us in kind. We pollute the world, we destroy other animals for sport, we exploit and kill one another for profit. We make ourselves enemies of God. But God waits – not, however, in a spirit that says, “I’ll get you in the end!” If God imposed instant sanctions there would be no evil-doing in the world; but neither would there be insight or mercy or real humanity; the world would be a larger version of the boarding-school I went to long ago! God has to wait so that we can see how God treats enemies. God waits for us to become human beings and “children of the Most High.”