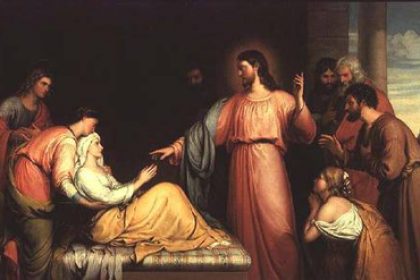 As soon as they left the synagogue, they entered the house of Simon and Andrew, with James and John.  Now Simon’s mother-in-law was in bed with a fever, and they told him about her at once.  He came and took her by the hand and lifted her up. Then the fever left her, and she began to serve them.  That evening, at sundown, they brought to him all who were sick or possessed with demons.  And the whole city was gathered around the door.  And he cured many who were sick with various diseases, and cast out many demons; and he would not permit the demons to speak, because they knew him.  In the morning, while it was still very dark, he got up and went out to a deserted place, and there he prayed.  And Simon and his companions hunted for him.  When they found him, they said to him, “Everyone is searching for you.”  He answered, “Let us go on to the neighbouring towns, so that I may proclaim the message there also; for that is what I came out to do.”  And he went throughout Galilee, proclaiming the message in their synagogues and casting out demons.

The rushed and crowded atmosphere of Mark’s gospel is very evident here.  There are people everywhere, not only the ones mentioned by name, but “all who were sick or possessed by demons,” and, as if that were not enough, “the whole city was gathered around the door.”  Clearly he was exhausted by it, so next morning “while it was still very dark, he got up and went out to a deserted place, and there he prayed.”  But even then they came “hunting for him.”  “Everyone is searching for you,” they said.

Still, in that push of the crowd he saw individual people, not a crowd.  He had time for Peter’s mother-in-law.  I have seen great figures in public, shaking hands with rows of people, but never looking at the person whose hand they are shaking; always looking at the next person.  It is as if only the abstract crowd existed, not individuals.  There was a debate a few years ago between two cardinals about the relationship of the universal Church to local Churches.  One held that the essence of the Church is found properly in the universal, while local Churches are limited manifestations of it.  The other wanted to see the universal Church as the sum of local Churches.  It reminded me of a remark by the German philosopher Hegel, “Would anyone who wished for fruit reject cherries, pears, and grapes, on the grounds that they were only cherries, pears, or grapes, and not fruit?”  Abstract ideas can run away with us and make us downplay concrete reality.  This is not how Jesus thought and acted.

The great 19th-century preacher, C.H. Spurgeon, wrote: “Very interesting is this little peep into the house of the Fisherman.  We see at once…the Lord’s gracious work upon one’s own flesh and blood….Peter’s house was probably a poor fisherman’s hut, but the Lord of Glory entered it, lodged in it, and wrought a miracle in it….God is oftener in little huts than in rich palaces.  Jesus is looking around your room now, and is waiting to be gracious to you.”

Jesus went “proclaiming the message and casting out demons.”  In the early chapters of Mark’s gospel the emphasis is less on the content of his preaching than on its effects.  For example, the leper who was cleansed went away and “spread the word,” but of course the word was word of his healing (1:45).  We sometimes speak of the Christian ‘message’ as if it could be written on a piece of paper.  But it is a healing, life-giving and liberating word.