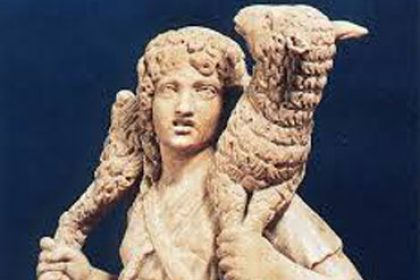 Jesus said, “Very truly, I tell you, anyone who does not enter the sheepfold by the gate but climbs in by another way is a thief and a bandit. The one who enters by the gate is the shepherd of the sheep. The gatekeeper opens the gate for him, and the sheep hear his voice. He calls his own sheep by name and leads them out. When he has brought out all his own, he goes ahead of them, and the sheep follow him because they know his voice. They will not follow a stranger, but they will run from him because they do not know the voice of strangers.”
Jesus used this figure of speech with them, but they did not understand what he was saying to them. So again Jesus said to them, “Very truly, I tell you, I am the gate for the sheep. All who came before me are thieves and bandits; but the sheep did not listen to them. I am the gate. Whoever enters by me will be saved, and will come in and go out and find pasture. The thief comes only to steal and kill and destroy. I came that they may have life, and have it abundantly.”

When Jesus said, “All who came before me are thieves and bandits,” he can hardly have meant to include the great prophets such as Isaiah, Jeremiah, Ezekiel…. But there were plenty of his contemporaries who deserved to be described as spiritual thieves and bandits.  They are always a plentiful species – or rather ‘we’, if the hat fits.  The expression ‘a wolf in sheep’s clothing’ we owe to Aesop, whose stories have delighted and instructed children and adults alike for 25 centuries.  “A wolf found great difficulty in getting at the sheep owing to the vigilance of the shepherd and his dogs.  But one day it found the skin of a sheep that had been flayed and thrown aside, so it put it on over its own pelt and strolled down among the sheep.  The lamb that belonged to the sheep, whose skin the wolf was wearing, began to follow the wolf in the sheep’s clothing; so, leading the lamb a little apart, he soon made a meal of her.”

A deceiver has to look like the real thing – has to look and sound genuine.  Otherwise he will deceive nobody.  Someone can quote and preach the Gospel to you, making all the right sounds and looking very serious, while robbing you spiritually – robbing you even of the gifts and fruits of the Holy Spirit in you: your real wisdom, your understanding… your fortitude… your joy…. Jesus gives the Spirit; the deceiver steals it away.  You are in far less danger from someone who doesn’t sound in the least like a Christian.

The genuine shepherd “goes ahead of the sheep and they follow him.”  Perhaps that is the key to discernment.   Does your shepherd go before you into the crises and the mysteries, or does he tell you what to do and then just look on?  Would he suffer for you?  Would he lay down his life – or even just his pride, or a generous measure of his time?  If he is reluctant to do this, then beware of him.

But Jesus is the Good Shepherd.  He goes before us (as shepherds did in those days).  A great 20th-century writer said, “No matter how low you fall in your life, you will meet Jesus coming up from deeper down to meet you.”