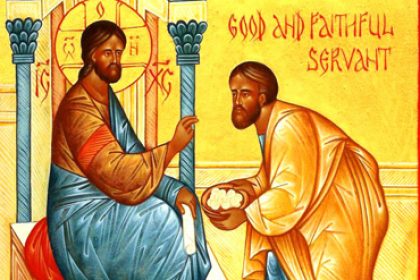 The parable in today’s reading has an unpleasant tone at first sight. Instead of telling us that everything is a gift of God, it tells us about investments and profits. And worse: the punch-line could come from a director of a multinational company! – “To all those who have, more will be given, and they will have an abundance; but from those who have nothing, even what they have will be taken away.”

To say that the spiritual world is ‘all gift’ is to say the truth. But to say no more would be to make it a purely passive thing. In reality we know that nothing deep or ‘inner’ can ever be given to us without our effort. You would love to give your knowledge of, say, a foreign language to someone you love, but it cannot be done without their labour. How much more your understanding, your wisdom, your experience? Even God’s gifts, poured out without measure, cannot really become mine unless I interiorise them myself. Struggle is part of the spiritual life, even though it remains true that everything is gift. And it’s a fact of experience (not a policy statement of a company) that the more I have the more I will receive. The more I know the more I am capable of knowing; the more I love the more I am capable of loving; the more I pray the more I am able to pray…. And likewise, sadly, the less.

A ‘talent’ was a measure of weight before it was a unit of currency (just as a pound was). You could have a talent of gold, a talent of silver, a talent of copper, etc.; it didn’t matter, it was still a talent. This is surely part of the parable’s message. It doesn’t matter what kind of talents you have: very ordinary ones, or bordering on genius; the same holds true of them all. We are to risk our talents, this parable teaches; in other words, we are to use them. The man who had only one talent was afraid to lose it, so he buried it in the ground. He probably looked at the people who had two talents or five, and he said, “It is all right for them; they can afford to risk and lose, but I have only one chance and it would be madness to risk it.  Very logical.  But there would be no life on earth if that logic prevailed everywhere.  We might feel safe, but we would just be dead safe.

It is clear that the parable was directed against the scribes and Pharisees, who were identified as the “wicked and lazy servant”. This servant buried the talent so as to be able to hand it back just as it was. The whole aim of the scribes and Pharisees was to keep the Law exactly as it was. In their own phrase, they sought “to build a fence around the Law.” The slightest alteration or adaptation was out of the question. But safety is not the supreme value in religion. In this parable Jesus is telling us we must take risks. Life itself is a risk, and the texture of it is continual risk-taking. Of course there are foolish risks that are better avoided, but that is because they are foolish, not because they are risks.  We are invited to use our gifts recklessly for the good of our families, our community, everyone we meet… and the many whom we will never meet.