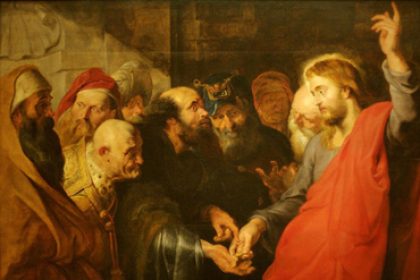 The Pharisees went and plotted to entrap Jesus in what he said.  So they sent their disciples to him, along with the Herodians, saying, “Teacher, we know that you are sincere, and teach the way of God in accordance with truth, and show deference to no one; for you do not regard people with partiality.  Tell us, then, what you think. Is it lawful to pay taxes to the emperor, or not?”  But Jesus, aware of their malice, said, “Why are you putting me to the test, you hypocrites?  Show me the coin used for the tax.” And they brought him a denarius.  Then he said to them, “Whose head is this, and whose title?”  They answered, “The emperor’s.” Then he said to them, “Give therefore to the emperor the things that are the emperor’s, and to God the things that are God’s.”

Praise some powerful person for qualities he or she doesn’t have, and you insult them in a subtle way. Flattery has been called the politeness of contempt.  But it works!  Only a very rock-like person could remain unmoved when a warm gush of flattery is playing over them.  Most people suspend all critical self-examination at such a moment.

The flattery of the Pharisees was more subtle still.  They probably knew that Jesus could not be flattered by lies, so they tried to flatter him with the truth.  “We know you are afraid of no one, and that a man’s rank means nothing to you!”  But there was treachery in every word.  They would entice him to bravado in speech, and then get him into serious trouble with the authorities for what he said!  Taxation of Jews by the Romans (who were the occupying powers) was a burning issue; and the Romans had dealt summarily with Judas the Gaulonite who tried to raise resistance to it.  Here then were these Pharisees trying to walk Jesus into the same fate.  They brought some Herodians with them, to make it a perfect trap.  If Jesus answered yes to their question he would be branded a collaborator; if he answered no he would be in deep trouble with the Herodians, who were collaborators with the Romans.  But he was ready.

What strikes you more and more in the gospels is the sheer intelligence of Jesus.  His answer was full of wit and insight.  It was full of significance for the future too.  The notion of separation between religion and politics (or, as it came to be known, the separation of Church and State) was unknown before him.  We see today the trouble that the lack of such a distinction makes in countries with Muslim majorities, and even in countries with Muslim minorities.

This saying of his, “Give back to Caesar what belongs to Caesar,” was useful from the start: it was of great importance to the early Christians, because they were often accused of disloyalty to the state; see, for example, Acts 17:7: “These people…have broken every one of Caesar’s edicts.”  St Paul wrote an exhortation to loyalty to the state (Romans 13:1-7, where he even says that the tax-man is doing God’s work!).  Clearly there is a tradition of civil loyalty that goes back to Jesus himself.

But passing beyond the particular question of taxes, it is of the greatest interest to see how Jesus faced people in authority.  His way is ultimately the model for how we ourselves are to face authority, as we do every day, in one way or another.  It is not a pleasant thing when a policeman approaches you and says, “Documents!”  It is like being asked what right you have to exist.  Jesus was asked precisely this kind of question one day in the Temple.  He was approached by “the chief priests, the teachers of the Law and the Jewish authorities.” He was on their ground.  “By what authority do you do these things…?” they demanded.  (He had been teaching, which was their job.)  But he was not one to bow down before authority.  He put a perfect fix on them.