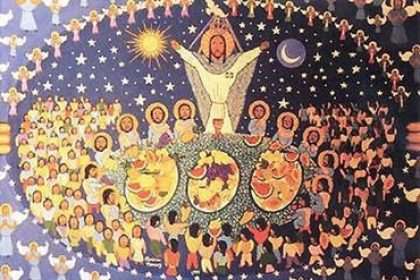 Once more Jesus spoke to them in parables, saying:  “The kingdom of heaven may be compared to a king who gave a wedding banquet for his son.  He sent his slaves to call those who had been invited to the wedding banquet, but they would not come.  Again he sent other slaves, saying, ‘Tell those who have been invited: Look, I have prepared my dinner, my oxen and my fat calves have been slaughtered, and everything is ready; come to the wedding banquet.’  But they made light of it and went away, one to his farm, another to his business, while the rest seized his slaves, mistreated them, and killed them. The king was enraged. He sent his troops, destroyed those murderers, and burned their city.  Then he said to his slaves, ‘The wedding is ready, but those invited were not worthy.  Go therefore into the main streets, and invite everyone you find to the wedding banquet.’  Those slaves went out into the streets and gathered all whom they found, both good and bad; so the wedding hall was filled with guests.  “But when the king came in to see the guests, he noticed a man there who was not wearing a wedding robe, and he said to him, ‘Friend, how did you get in here without a wedding robe?’ And he was speechless.  Then the king said to the attendants, ‘Bind him hand and foot, and throw him into the outer darkness, where there will be weeping and gnashing of teeth.’  For many are called, but few are chosen.”

“On this mountain the Lord of Hosts will prepare for all peoples a banquet of rich food, a banquet of fine wines….”  Thus begins the first reading of today’s Mass, a reading from the prophet Isaiah, who lived about seven centuries before Christ.  In the literatures of most countries there is a longing for a future golden age (or sometimes nostalgia for a past one).  Such a future time or place is called Utopia, a ‘non-existent place’ (from the Greek, ou = not, and topos = place).  Practical people have always been wary of such thinking.  “An acre in Middlesex,” said Macaulay, “is better than a principality in Utopia.” Isaiah’s prophecy, however, was not based on wishful thinking but on God’s promise, a promise that he expected God to fulfil, not in Utopia, but “on this mountain.”

All God’s promises are being fulfilled in Jesus; this is the faith of Christians.  “The Son of God, Jesus Christ…was not ‘Yes and No’; but in him it is always ‘Yes’.  For in him every one of God’s promises is a Yes'” (2 Corinthians 1:19-20).  Isaiah’s prophecy, like all the others, is fulfilled in him.  He is the one who prepares the “messianic banquet”  –  a symbol of the joy of the “messianic kingdom”, to be inaugurated by the Messiah.  There is a special interest, then, when we hear Jesus begin a story with the words, “The kingdom of heaven may be compared to a king who gave a wedding banquet for his son.”

The story in today’s reading is about this.  He calls it a wedding feast, which was the most joyful time in a Jew’s life.  But those who were called refused to come.  So he sent his servants out into the highways and byways to invite everyone they could find. “They gathered all whom they found, both good and bad.”  This is Jesus talking about his life’s work.  Many of his own people were resisting his invitation, so he was now inviting everyone, good and bad alike.  This was no fiction.  In real life he befriended the outcasts of society, Samaritans, tax-collectors and sinners, foreigners, pagans…and he invites even us!

What are we to make of the one who was then thrown out?  He “was not wearing a wedding garment.”  That is to say, he had no appreciation of what he had been invited to.  “Friend, why are you here?” the bridegroom asked him.   Each of us has to imagine these words addressed to him or herself.  It doesn’t matter where we come from  –  the highways and the byways  –  but it does matter that we know where we are, and what we have been invited to.  If we bring with us a spirit of arrogance and division, a spirit of cynicism and discouragement, it is like going to a wedding in our worst clothes.

A wedding is a celebration of love.  This banquet is a love-feast.  It is Christ joining himself in marriage to his Bride, the Church.  St Paul took up this image. “Husbands, love your wives, just as Christ loved the Church and gave himself up for her” (Ephesians 5:25).  Johann Tauler, the 14th-century disciple of Meister Eckhart, wrote about this union.  “This love is so close, so interior, so secret, so tender and so ardent as to be beyond all comprehension.  All the great theologians of Paris, with all their wisdom, could never express what it is. However much they wanted to speak about it they could only keep silence…. And yet any simple persons, if they have put all their trust in God and if they are humble, may feel and taste something of this love in the depths of their souls; though even such a person will never be able to grasp what it is or express it in words.”