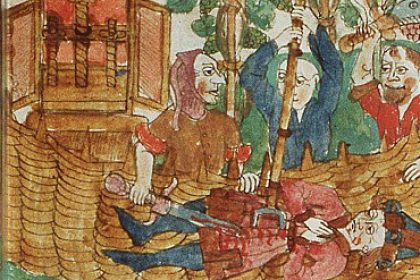 “Listen to another parable. There was a landowner who planted a vineyard, put a fence around it, dug a wine press in it, and built a watchtower. Then he leased it to tenants and went to another country.  When the harvest time had come, he sent his slaves to the tenants to collect his produce.  But the tenants seized his slaves and beat one, killed another, and stoned another.  Again he sent other slaves, more than the first; and they treated them in the same way.  Finally he sent his son to them, saying, ‘They will respect my son.’  But when the tenants saw the son, they said to themselves, ‘This is the heir; come, let us kill him and get his inheritance.”  So they seized him, threw him out of the vineyard, and killed him.  Now when the owner of the vineyard comes, what will he do to those tenants?”  They said to him, “He will put those wretches to a miserable death, and lease the vineyard to other tenants who will give him the produce at the harvest time.”  Jesus said to them, “Have you never read in the scriptures: ‘The stone that the builders rejected has become the cornerstone; this was the Lord’s doing, and it is amazing in our eyes’?  Therefore I tell you, the kingdom of God will be taken away from you and given to a people that produces the fruits of the kingdom.

To the Jews of old the vine was a symbol of their own race, their very identity.  God took them from the land of slavery and transplanted them in new soil: “You brought a vine out of Egypt; to plant it you drove out the nations” (Psalm 79, responsorial psalm of today’s Mass).

In countries where the vine does not grow, some of the detail is lost on us. The vine is a most vigorous plant and needs severe pruning.  It displays a great abundance of leaves, but only some of the branches are fruit-bearing.  The ones that produce only leaves have to be cut back drastically, otherwise they rob life-giving sap from the others.  The wood of the vine is perfectly useless, not even making good firewood.  So it was usually just put in a heap and burnt.  We get the point of what Jesus once said: “Anyone who does not remain in me is like a branch that has been thrown away – they wither; these branches are collected and thrown on the fire” (John 15:6).  The aspects of our life that are not fruit-bearing are for pruning, so that we might bear fruit.  Leaves are the plant thinking of itself, fruit is the plant thinking beyond itself: thinking of the next generation.  We are to think beyond our own interests. The sap in us is the life of Christ.  It is for fruit-bearing; we are not to turn it into stuff that is not even fit to make a fire.

The hedge (in today’s Gospel) was for keeping out animals and thieves; the tower was a place from which to watch for them.  There was no doubt about where the boundaries lay.  In Tuscany, Italy, where St Catherine of Siena was born, I saw miles and miles of vineyards, but they were not divided: all were one vast plantation of vines.  The neighbours know, apparently, where one ends and another begins.  St Catherine in the 14th century used this as an image of how we should be with others: we are ourselves, yes, we have our own space, but we are not divided from others.  This seems a perfect arrangement, a perfect image of harmony.  But today’s Gospel story is from a world that divided property jealously: that is why the story is about violence and murder.  Whenever I bar people from my life I am subscribing to the formula for violence; it is a kind of ethnic cleansing on a small scale.  In the parable the tenants ended by killed the son.

Yes, there is a sense in which I am my neighbour.  If I exclude someone from my life I am excluding myself from full humanity.  But the image of vine has an even more startling thing to show us: “I am the vine, you are the branches,” Jesus said (John 15:5).  But the vine is the branches!  Unlike other trees where you can distinguish clearly between trunk and branches, the vine is just all branches!  “I am the vine and you are the branches”: the vine is the branches!  Jesus is more than just a neighbour who makes no distinction between what is his and what is yours.  In a real sense he is you, and he is also your neighbour.  To banish your neighbour from your life is to banish him.  To lop off a branch is to lop off Christ.