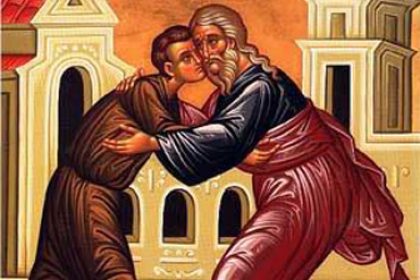 Peter came and said to him Jesus, “Lord, if another member of the church sins against me, how often should I forgive? As many as seven times?” Jesus said to him, “Not seven times, but, I tell you, seventy-seven times. For this reason the kingdom of heaven may be compared to a king who wished to settle accounts with his slaves. When he began the reckoning, one who owed him ten thousand talents was brought to him; and, as he could not pay, is lord ordered him to be sold, together with his wife and children and all his possessions, and payment to be made.  So the slave fell on his knees before him, saying, ‘Have patience with me, and I will pay you everything.’  And out of pity for him, the lord of that slave released him and forgave him the debt.  But that same slave, as he went out, came upon one of his fellow slaves who owed him a hundred denarii; and seizing him by the throat, he said, ‘Pay what you owe.’  Then his fellow slave fell down and pleaded with him, ‘Have patience with me, and I will pay you.’  But he refused; then he went and threw him into prison until he would pay the debt.  When his fellow slaves saw what had happened, they were greatly distressed, and they went and reported to their lord all that had taken place.  Then his lord summoned him and said to him, ‘You wicked slave! I forgave you all that debt because you pleaded with me.  Should you not have had mercy on your fellow slave, as had mercy on you?’  And in anger his lord handed him over to be tortured until he would pay his entire debt.  So my heavenly Father will also do to every one of you, if you do not forgive your brother or sister from your heart.”

“He that cannot forgive others, breaks the bridge over which he himself must pass… for everyone has need to be forgiven,” wrote George Herbert 350 years ago.  Forgiveness flows at the heart of human life; without it a human being becomes a cesspool of bitterness.  Since it is central to our life, nothing is more important than to look as deeply as we can into it.

Forgiveness is a ‘nice’ word, in the sense that just about everyone would be pleased to be described as forgiving.  That should be enough to put us on the alert; we can suspect straight away that many vicious attitudes have attempted to dress up like it.

A good example was given by the man who said that doing an injury puts you below your enemy; revenging an injury makes you even with him; and forgiving an injury sets you above him.  Can this be real forgiveness, when it only serves to make you feel superior, to bloat the ego?  But there are subtler ones than this.

Someone does me harm, perhaps unknowingly.  I lack the courage simply to point it out.  Over the weeks (or years) I become full of silent anger.  But I am now more afraid than ever to point out the wrong, because anger tends to be explosive and I am afraid of explosions.  Instead I swallow it, ‘spiritualise’ it and tell myself that I have forgiven him or her.  Of course I have not.  Instead I have swallowed a dose of poison that will kill my relationship with that person.  Fear has been masquerading as forgiveness.

The mark of real forgiveness is a lively awareness that I am in need of forgiveness myself.  That is what is missing in the counterfeit forms.  “Forgive us our trespasses as we forgive those who sin against us.”  We are set free to forgive others in an uncomplicated way when we accept that our own books are not balanced either – that nobody’s books are balanced,  that every human being needs another chance, and another: seventy times seven; in others words, endlessly.

There are the over-polite people who are always begging your pardon; you often feel they are just side-stepping you, they don’t want to meet you or relate to you in any real way.

Probably the most frequent evasion under this heading is when someone makes excuses in the guise of asking forgiveness.  To give an explanation or make an excuse is not the same thing as asking for forgiveness.  Such excuses are really excuses for not asking forgiveness.  If there is a need to ask forgiveness, I shouldn’t half do it, mixing it with excuses.  I should do it simply, with no complications.

It is the free flow of forgiveness – giving and receiving it – that keeps our life simple and free from futile self-justification.  The deepest source of this simplicity and freedom is my awareness that God utterly forgives me.  Meister Eckhart said, “Whatever God does he does completely, like the cup running over.  Whom he forgives he forgives utterly and at once, much preferring great forgiveness to little.”