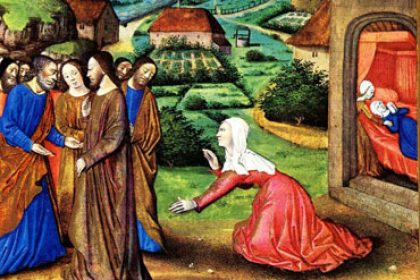 Canaanites are cast in a bad light in the Bible. Their gods are Baal (2 Kings 10:18-28) and Moloch (2 Kings 23:10), their goddesses Astarte (2 Kings 23:13) and Ashera (2 Kings 23:4-7). They are accused of practising fertility rites, sacrificing children and many other abominations on account of which ‘the land itself vomiteth out her inhabitants’ (Leviticus 18:25).

How much of this sinister reputation survived in New Testament times it is difficult to tell. In Mark’s version of the story the woman is described as a Greek, a Syrophoenician by birth (Mk 7:26). Thus she is identified by her non-Jewish language and ethnicity rather than by her belonging to an idolatrous religion.

In Matthew’s account, however, she is a Canaanite, who ‘comes out’ from the vicinity of Tyre and Sidon, greeting Jesus as ‘son of David’, taking it for granted that he has the power and authority to liberate her demon-possessed daughter.

According to the way that Matthew tells this quite complex story, the woman believes in his authority to help her more straightforwardly than Jesus himself seems to do.

Jesus has just been hassled by Pharisees and scribes. He was on the western shore of the Sea of Galilee, where people have recognized him and brought all the sick they could find for him to heal (Matt 14:34-36). The Pharisees and scribes have come up from Jerusalem to accuse him of transgressing the traditions of the elders: his disciples ‘do not wash their hands when they eat’ and suchlike.

This leads to a lengthy argument (Matt 15:1-20). Growing trust among ordinary Galileans in Jesus, at least as a healer, is matched by increasing suspicions of his orthodoxy on the part of the religious leaders. They have discovered that his disciples flout the Mosaic legal traditions.

Apparently failing to persuade them that what defiles a person is not eating with unwashed hands but what proceeds from the heart, he suddenly turns away, as if in disgust, and travels as far north as he ever goes, to the border between his native Galilee and the Roman province of Syria. It is the clearest line, geographically, that he ever draws between his Jewish inheritance and the universal mission that is to come.

Geographical details in the gospels often have symbolic significance and immense theological implications for the future. Since the woman ‘came out’ to meet him it sounds as if, though in the neighbourhood of Tyre and Sidon, Jesus did not go down to the Mediterranean coast where these great seaports were located.

Tyre and Sidon of course still exist, in modern Lebanon. In New Testament times the inhabitants were mostly Gentiles, non-Israelites. The judgment on these two cities, Jesus has already predicted, would be severe though less so than on the cities where most of his mighty works had been done — ‘because they did not repent’ (Matt 11:20)!

Symbolically, Tyre and Sidon evidently represent the wicked heathen world — though if he had done mighty works there ‘they would have repented long ago in sackcloth and ashes’ (11; 21). However, he may well have been able to see the Mediterranean in the distance: the sea which would take his message out to the Greco-Roman world.

When the woman appeals to Jesus he does not reply. Angered by her screaming, his disciples interpret his silence as his wanting nothing to do with her. Seemingly he agrees with them at first that his mission is uniquely to “the lost sheep of the house of Israel”. Kneeling at his feet, however, the heathen woman persists. He repeats that he has nothing for the likes of her, putting it graphically, even quite brutally — he has no authority to give the bread of the children of Israel to ‘dogs’.

It is not easy to take the sting out of what Jesus says here. Dogs are sometimes regarded as ‘unclean’ in the Bible though never as explicitly as in Islamic tradition (hence the revulsion in the Middle East at the use of dogs by American soldiers to torture Iraqi prisoners at Abu Graibh). After all, as he has said earlier, ‘Do not give dogs what is holy, and do not throw your pearls before swine’ (Matt 7:6). That sounds clear enough.

“But it is fair”, the woman retorts, unabashed, and certainly behaving with a panache that would have been rare for a woman in those days. Evidently she distinguishes between wild dogs and housedogs.

Domestic dogs, she reminds Jesus, get the ‘crumbs that fall from the table’ — presumably the sodden lumps of pitta bread that functioned as spoons and napkins. These dogs, after all, belonged to the household. They were not like feral dogs scavenging outside in the garbage pits. In effect, they belonged in the house of the children of Israel.

At her witty and even cheeky repartee Jesus’ reluctance to engage with her suddenly dissolves — ‘O woman, great is your faith! Be it done to you as you desire’. Perhaps he even dissolves into mirth.

It is certainly one of the very few funny stories in the gospels. How much are we to make of it? Has Jesus just been teasing the woman, or is she testing him? Is this a turning point for him, his discovery, as he deals with her persistence, that his mission transcends the boundaries of Israel?

Taking this episode, like so many others in the gospels, as prophetic of what will unfold in due time, doesn’t this exchange prefigure the venture of Christian faith into pagan territory?

Doesn’t this episode anticipate the vision vouchsafed to the Apostle Paul at Troas, when he sees a man of Macedonia, beseeching him to come over the Aegean Sea to Greece (Acts 16: 9)? — as if the Christian mission to Europe was by invitation. Isn’t this one of the episodes in the life of Jesus which inaugurate the universal mission of the Church?

Does the Canaanite woman represent the generations to come of people of pagan origins who would look to the Christian faith for liberation from idolatry and demonic possession? (How many of them, in the event, were forcibly baptized at the behest of their rulers, or kept in the Church by the threat of excommunication and worse?)

Doesn’t the structure of the conversation with the Canaanite woman invite us to reflect on the possibilities — down the line — of mutual recognition between non-Christian religion and Christianity?

Isn’t this wonderful little story an invitation to reflect on the possibilities of liberation that pagans may hope to find in Christianity, and the necessity, if they are not to be disappointed, that we Christians discover possibilities in ourselves that call us beyond our inherited boundaries?