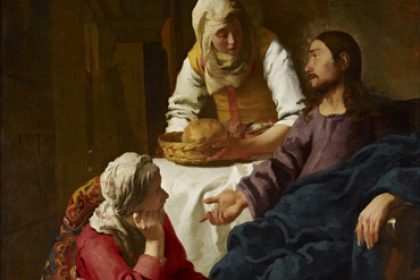 38 Now as they went on their way, he entered a village; and a woman named Martha received him into her house. 39 And she had a sister called Mary, who sat at the Lord’s feet and listened to his teaching.

40 But Martha was distracted with much serving; and she went to him and said, “Lord, do you not care that my sister has left me to serve alone? Tell her then to help me.”

“One thing is needful”

41 But the Lord answered her, “Martha, Martha, you are anxious and troubled about many things; 42 one thing is needful. Mary has chosen the good portion, which shall not be taken away from her.”

38 Now as they went on their way, he entered a village; and a woman named Martha received him into her house.

“Now as they went on their way” — Luke continues to emphasise that Jesus is on his way to Jerusalem and crucifixion.

“he entered a village; and a woman named Martha received him into her house” — The village is not named but we know from John’s Gospel that this family lived in Bethany (Jn. 11: 1) less than four kilometers from Jerusalem. Later we will see that Jesus “on the way to Jerusalem was going through the region between Samaria and Galilee” (Lk. 17: 11), not anywhere near Jerusalem or Bethany. Luke has brought forward the story of Martha and Mary to link with and explain some element in the story of the Good Samaritan (Lk. 10: 25–37; last Sunday’s Gospel).

39 And she had a sister called Mary, who sat at the Lord’s feet and listened to his teaching.

“And she had a sister called Mary” — This Mary is not Mary of Magdala but of Bethany.

“Lord” — This is the first of three mentions of this designation in this passage (vv. 39, 40, 41). This is Jesus’ post–resurrection divine title.

Jesus does three things which were not allowed in the Jewish culture of the day: (i) he was alone with women who were not his relatives; (ii) a woman served him; (iii) he taught a woman in her home whereas the Jewish scribes refused to instruct women.

40 but Martha was distracted with much serving; and she went to him and said, ‘Lord, do you not care that my sister has left me to serve alone? Tell her then to help me.’”

“But Martha was distracted with much serving” — Jesus was on his way to Jerusalem with a large contingent of people including the twelve apostles, at least seventy disciples and some women. It could be that some of these were visiting Martha and Mary’s home with him and would have been sitting at his feet with Mary. This is what is meant by “much serving”. The words could also mean that Martha was preparing a large meal of several dishes for Jesus.

“and she went to him and said, ‘Lord, do you not care that my sister has left me to serve alone? Tell her then to help me’” — Martha complains about all that she has to do and reproaches both Jesus and Mary for leaving her alone to do all the work. She asks Jesus to intervene and have Mary join in the preparation of the meal. She places her work as more important than Mary’s listening to Jesus.

41 But the Lord answered her, “Martha, Martha, you are anxious and troubled about many things; 42 one thing is needful. Mary has chosen the good portion, which shall not be taken away from her.”

“But the Lord answered her, ‘Martha, Martha” — By twice addressing her by name Jesus shows his affection for Martha. He is not reprimanding her. He is tender and gentle in expressing priorities.

“you are anxious and troubled about many things; one thing is needful. Mary has chosen the good portion, which shall not be taken away from her.’” — The “one thing [that] is needful” is to pay attention to the guest which in this case means to pay attention to the word of God that Jesus is sharing as a prophet. Mary chose to do that and respect the prophet. Martha was too anxious to do practical charitable work rather than listen to God’s word. She erred by not listening to the prophet, by being too preoccupied with what she thought was necessary for the perfect hostess to do. She should not have expressed resentment at her sister and, certainly not invite Jesus, the guest, to intervene in this case.

This is the core of the story of Martha and Mary. Jesus was not forbidding hospitality, a much promoted virtue in the Old and New Testaments. Since Luke 9: 51 when Jesus “set his face towards Jerusalem”, he has been preparing his disciples in the virtues they require to continue his work of salvation. The message here is that all apostolic work begins with the word of God which tells what God wants his followers to do. No one should be overcome by being “anxious and troubled” with cares and worries that they undertake in very good faith. This is a strong theme in Luke’s Gospel (Lk. 8: 14; 12: 11–12, 22–23; 21: 34–35). Jesus is saying that all prayer, all apostolic activity should flow from listening to the word of God. That is the “one thing needful”.

As usual we begin by examining what this passage tells us about Jesus. At a quick glance it would appear to speak about Martha more than Jesus and could give the impression that it says almost nothing about him. Let us see.

(i)        The most telling characteristic of Jesus in this Gospel Reading is that he is willing to, and in fact does, share his word. He will share it anywhere, even in places where he would not be expected to share. It was regarded as very improper for Jewish rabbis to be alone with women who were not relatives, to instruct a woman or to have a woman serve him. Jesus overlooked these taboos and was willing to deepen Mary’s knowledge and faith in God and accept Martha’s services. Martha provided an opportunity for Jesus to stress the priority of the word of God — what Mary was doing by listening was more important than what Martha was doing by serving.

Jesus showed himself to be a teacher of the Jewish Law with his personal authority and a prophet (one who speaks for God) to everyone, not just to males. His central message was that the kingdom of God was fulfilled in him. He was regarded as the new Moses, Israel’s first teacher and prophet. Jesus never used the title “prophet” for himself nor did the four evangelists, though they mentioned that others thought him to be a prophet (Lk. 7: 16, 39; 9: 8, 19; 24: 19).

Jesus is universal, all–embracing, in his audiences. He ate with tax collectors and sinners (including females) and here he shows himself willing to instruct women who were not sinners. It is very important nowadays to realise that Jesus is a teacher not only in the past but for our generation also. He has given this power and authority to his Church.

(ii)       This passage tells us a second thing about Jesus: he is “Lord”. This name expresses the mystery of Christ who is Son of God and Son of man. He is divine. The apostle Thomas made the sublime act of faith, “My Lord and my God”. John the Evangelist will have Jesus give to the Mary of this passage the same message, that he is “the resurrection and the life”.

This Reading is about a visit of Jesus to Bethany, the home of Martha and Mary. It is out of context in this chapter because Bethany was very close to Jerusalem and Jesus is only beginning his journey to that city where he will not arrive for some months. It is placed immediately after the parable of the Good Samaritan for a reason — to clarify discipleship.

In that preceding parable there is a contrast. On the one hand there are the two religious persons, the priest and Levite; on the other the ‘pagan’ Samaritan. The first couple, dedicated to serving God in prayer and sacrifice, seemed to ignore practical service to suffering humanity. The other, certainly not a worshipper in the Temple, appeared in a better light, more Christian, as it were. The message could be misunderstood; it needed clarification. Enter the story of Martha and Mary.

Martha welcomed Jesus into her home. She decided to give him a sumptuous meal; she planned the menu and everything else. She was in charge. Perhaps she was a little jealous of her sister spending all her time with Jesus. Martha was certainly annoyed that she had to do all the work, even though that is what she had planned. She was prepared to leave Jesus on his own while the two sisters prepared the meal. The meal, in her eyes, in a sense, was more important than Jesus!

Mary, on the other hand, “sat down at the Lord’s feet” and listened as he spoke. She was a learner, a disciple. We are not told that she took part in a conversation. Jesus was central and she did not interrupt. She certainly got to know the mind and the will of God through Jesus.

Like the priest, the Levite and the Samaritan, Martha thought that she was doing the best thing in the circumstances. She was “serving”, “diakonia”, the official Greek word used for ministry to the Lord. So many of us can presume that what we are doing is the best thing, perhaps the only way to serve the Lord.

How are we to judge what is best? Jesus tells us, through his words to Martha, that listening to the word of God is the “one thing necessary”. God’s word belongs to him and comes from him. It is his way of letting us know what we should do. He does not condemn or declare as unimportant “diakonia” in any form. It is good and laudable. But listening should come first. It is not a question of one or the other but of integrating both.

Mary, his mother, was Jesus’ greatest disciple. According to his words, her role as a disciple was more important than her role as his mother. She spent so much of her time reflecting on his words. Only when she knew his will did she act — “Let what you have said [she had listened] be done to me (Lk. 1: 38); “My mother and my brothers are those who hear the word of God and put it into practise” (Lk. 8: 21).

Listening to God’s will is the first act in discipleship.