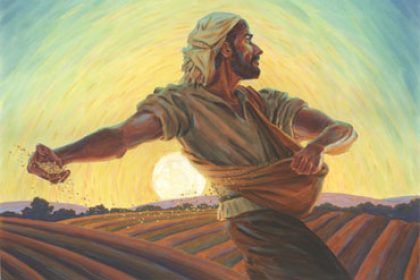 That same day Jesus went out of the house and sat beside the sea.  Such great crowds gathered around him that he got into a boat and sat there, while the whole crowd stood on the beach.  And he told them many things in parables, saying: “Listen! A sower went out to sow.  And as he sowed, some seeds fell on the path, and the birds came and ate them up.  Other seeds fell on rocky ground, where they did not have much soil, and they sprang up quickly, since they had no depth of soil.  But when the sun rose, they were scorched; and since they had no root, they withered away.  Other seeds fell among thorns, and the thorns grew up and choked them.  Other seeds fell on good soil and brought forth grain, some a hundredfold, some sixty, some thirty.  Let anyone with ears listen!”

Then the disciples came and asked him, “Why do you speak to them in parables?”  He answered, “To you it has been given to know the secrets of the kingdom of heaven, but to them it has not been given.  For to those who have, more will be given, and they will have an abundance; but from those who have nothing, even what they have will be taken away.  The reason I speak to them in parables is that ‘seeing they do not perceive, and hearing they do not listen, nor do they understand.’  With them indeed is fulfilled the prophecy of Isaiah that says: ‘You will indeed listen, but never understand, and you will indeed look, but never perceive.  For this people’s heart has grown dull, and their ears are hard of hearing, and they have shut their eyes; so that they might not look with their eyes, and listen with their ears, and understand with their heart and turn – and I would heal them.’  But blessed are your eyes, for they see, and your ears, for they hear.  Truly I tell you, many prophets and righteous people longed to see what you see, but did not see it, and to hear what you hear, but did not hear it.

John Chrysostom (c. 349-407 AD) commented, “The fact that the greater part of the seed perished was not due to the sower but to the soil, that is, the mind. The Sower [Christ] made no distinction between rich and poor, wise or foolish, but spoke to all alike….”  Chrysostom also noted how non-judgmental the story is. “He does not judge them openly and say, This is what the lazy received and they lost it, this is what the rich got and they choked it, this is what careless people got and they neglected it.  He would not harshly reprove them, so as not to alienate them altogether.”

Another ancient commentator: “The wayside is the mind trodden and hardened by the continual passage of evil thoughts; the rock, the hardness of the self-willed mind; the good soil, the gentleness of the attentive mind.”

Passive means receptive or listening.  Remember the last time you tried to have a conversation with someone who never listens?  Perhaps you both talked a lot, but there was no conversation, your minds were not engaged with each other.  At such times you feel more alone than when you are alone.  In the total absence of the contemplative spirit, this is what the whole world would be like.

‘Passive’, ‘humble’…. These are not popular words today; they are in fact counter-cultural.  Men especially would be ashamed of having any of these words used of them.  But try to imagine someone who had no vestige of either: he (or she) would be an embodiment of ego.  Our deeper self would not be ashamed of these words.  They are the language of the Beatitudes, which are like a portrait of Christ himself.  This is the deeper soil from which real growth happens in us.  And the seed of God’s word is able to wait till the soil is right.

We are living in a deafening world.  The noise of machines is sometimes hard to bear, but far more deafening is the insistence of the human voice.  It is almost impossible to escape from it.  Every age, no doubt, talked its full; but we have ways of storing, multiplying, amplifying, and broadcasting the voice till it fills every crevice in our lives.  A new magazine was advertised as “opinionated.”  This word means “thinking too highly of, or adhering persistently to, one’s opinions; conceited; obstinate in opinion; dogmatic.”  How bizarre that that word should be used to advertise a magazine!  How many people would like to have, say, a son-in-law who was “opinionated”?  Yet it is regarded as a desirable quality in a magazine.  We are in a strange place now.  How will the word of God penetrate our noise?  Some seed fell on tarmac, and some seed was swept away by torrents of language from DJs and advertisers….