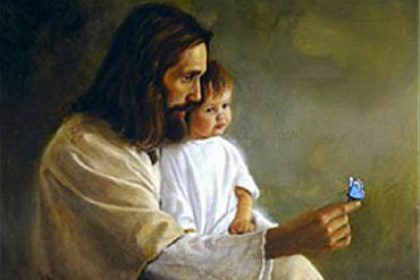 At that time Jesus said, “I thank you, Father, Lord of heaven and earth, because you have hidden these things from the wise and the intelligent and have revealed them to infants; yes, Father, for such was your gracious will.  All things have been handed over to me by my Father; and no one knows the Son except the Father, and no one knows the Father except the Son and anyone to whom the Son chooses to reveal him.

“Come to me, all you that are weary and are carrying heavy burdens, and I will give you rest.  Take my yoke upon you, and learn from me; for I am gentle and humble in heart, and you will find rest for your souls.  For my yoke is easy, and my burden is light.”

The French mystic, Jeanne-Marie Guyon (1648-1717), wrote, “Through being given rule and method how to love God, people have in great measure been estranged from God.  How unnecessary is it to teach an art of loving! The language of love, though natural to the lover, is nonsense and barbarism to one who does not love. The best way to learn the love of God is to love God. The ignorant and simple, because they proceed with more heart and greater simplicity, often become better at it. The Spirit of God needs none of our arrangements and methods; when it pleases him, he turns shepherds into prophets: and, so far from excluding any from the Temple of Prayer, he throws wide the gates, that all may enter; while Wisdom cries aloud in the streets, ‘You that are simple turn in here’ (Proverbs 9:4).”

I asked an 8-year old American in Iceland how long it took her to learn Icelandic (she was the best in the family at it).  She replied, “A day or two days, or a week.”  In other words she didn’t think about it at all; she just played with her Icelandic friends.  Children learn spontaneously; but adults proceed “by rule and method.”  We need handbooks for everything because we have lost the capacity for direct experience.

While an adult stands back to analyse something, a child just becomes one with it.  We have so venerated the analytical mind that the other faculties are scarcely taken into account at all.  I have known people who were intellectually gifted but incapable of looking after themselves or anyone else.  Far from seeing this as an embarrassment, we make it almost a badge of honour: we may laugh at him but we secretly revere the absent-minded professor.  But as Chesterton said, “A madman is not someone who has lost his mind; he is someone who has lost everything except his mind.”

Neglect of the other faculties costs us dearly.  If we neglected the mind to the same degree that we neglect the other faculties, we would be called barbarians.  But we tolerate, even cultivate, a barbarism of feeling and will.   Look at the depravity that is held up before us in the entertainment industry.  Is not much of it barbarism?

If we neglect feeling and will, we will never learn to love; we will learn only a caricature of love: greed.  To love is to respect, to care about.  In its deepest meaning it is to become one with (while the word ‘analysis’ means just about the opposite: to take apart).  There seems to be a serious imbalance built into our educational systems: we destroy something that children are born with (or perhaps they would soon begin to lose it anyway), and we give them what it takes to fit well into a mad society, leaving many of them as damaged as the society itself.

It was when the towns of Chorazin, Bethsaida and Capernaum had rejected Jesus that he exclaimed, “I thank you, Father, Lord of heaven and earth, because you have hidden these things from the wise and the intelligent and have revealed them to infants.”  Perhaps there were many intelligent people in those towns, and he was sick of arguing with them.  Their intelligence left no mark on the history of the world: of Chorazin and Bethsaida there is no trace left; Capernaum is only a couple of ruins.  But the extraordinary love that Jesus embodied will never be forgotten.