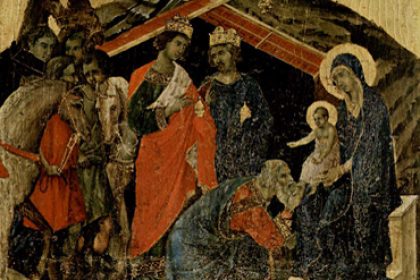 Ours is not the first age to look east for wisdom; the East has always had a reputation for it.  The word ‘magi’ is translated here as “wise men.”  ‘Magus’ meant different things: a magus was a member of the Persian priestly caste; or one who possessed occult knowledge and power (this is the origin of our word ‘magic’).  If people had the careless habit of throwing around the term ‘New Age’ in those times as many do now, the Magi would certainly have been called New Agers.

Herod was one of history’s great tyrants: he spared no one, not even his own family; to keep his grip on power he murdered his wife, three of his sons, his brother-in-law, an uncle, and his mother-in-law.  He had been appointed “King of the Jews” by the Senate in 40 BC and he had already reigned for over thirty years.  He was in no mind to hear of a new king, especially one who was no son of his. “He was frightened, and all Jerusalem with him.”  He was frightened to hear of a rival, and the people were frightened because they knew what he was capable of.   But the chief priests and the scribes – the religious authorities of the day – were able to give him directions in locating this rival.  They knew in detail about the expected arrival of “the anointed one.”  They had studied the Scriptures, they knew the prophesies, they knew where to look.  And they used all that knowledge to direct a killer to him.  Nor was it just a momentary lapse of judgment: Herod would fail to kill him, but later on they would succeed.

The Magi were foreigners, pagans, astrologers: everything that was most base in the eyes of the religious authorities.  Though they had not the benefit of the prophecies the Magi came and did the Child homage.  Tradition calls them “kings” – judging, probably, by the wealth of the gifts they brought.  At any rate they came looking for a king.  Where do you look for a king?  In a palace.  Who else is likely to be there?  A royal family.  But the Magi came to a cave or a stable where they found a poor family, with animals and perhaps a few shepherds.  All the appearances would have told them they had made a ridiculous mistake, yet “falling to their knees, they did him homage.”

We can look at the significance of this from many angles.  Preparation is no guarantee that you will be ready; it may actually blind you, because you prepare according to your own idea.  There is no substitute for an open heart; learning sometimes has the effect of closing the heart, and in some cases even the mind.  Religious authority is the most perilous of all: the claims are absolute, the deepest things are at stake, and with the years comes the habit of listening to no one.  The most chilling feature of this story is the collusion of the religious leaders with Herod.

Later on, when simple people were shouting out their enthusiasm for John, the Pharisees said to him, “Teacher, order your disciples to stop.”  He answered, “I tell you, if these were silent, the very stones would cry out” (John 19:40-41).  We are not to be surprised at where praise of God can spring up.  It is not recorded that any of the authorities went with to Magi to search for the Child; it was the pagan astrologers who sought and found him.