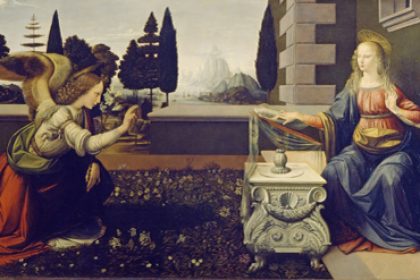 When the prophets of Israel spoke of God’s intervention in human history, they imagined it as another thunderous event like Exodus or Mount Sinai.  No one imagined that it would be an event so hidden in ordinariness as the conception of a child.

There are many stories in world literature about the disappointment of expectation when the reality appears.  The first play I ever saw in a theatre was called Professor Tim, an elderly and wealthy American whose return to the old country was eagerly awaited by his family.  Their disappointment was extreme when he arrived.  He staggered around day after day with a whiskey bottle, making caustic remarks about everybody.  He was quickly ostracised by everyone (but perhaps there was one exception, probably a local down-and-out; I can’t remember).  At the end of the play he suddenly revealed that it was all an elaborate game to find out what they were really like.  He disinherited the lot of them, and left all his wealth, I suppose, to the one person who didn’t reject him.

All such stories have some resonance of the Incarnation.  Mount Sinai or such would compel your attention; it would affect you powerfully but would not sift your spirit or test your depth.  It would match your expectation, and would therefore not bring you to a new awareness.  It would be all ‘out there’, and to that extent only a spectacle.  We have a great hankering for religious visions and transparent messages.  Our religious sensibility is deeply affected by television and the cinema.  But the Incarnation comes closer to us than any spectacle; it comes behind the eye, so to speak.

I spent some time once in a Cistercian monastery.  Monks have many choral Offices throughout the day, three of them being at 6 am, noon and 6 pm.  As they stood in choir, waiting, facing the altar, the Angelus bell was rung.  I expected that they would recite the Angelus, but instead they stood there in silence for a couple of minutes.  It was deeply affecting. The Word became flesh  –  this flesh.  The Word entered our world silently, unobserved.  “When peaceful silence lay over all, and night had run the half of her swift course, down from the heavens, from the royal throne, leapt your all-powerful Word” (Wisdom 18:14-15).

In Nazareth the Catholics indicate Mary’s house as the place of the Annunciation, while the Greek Orthodox indicate the site of the village well.  Nobody knows where it took place, but the symbolism of both places is very affecting.  The kitchen and the village well are the most ordinary places in a most obscure village.  “Can anything good come out of Nazareth?” Philip asked.  Yes, the greatest of all.