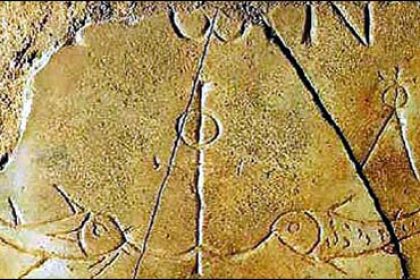 Today’s commentary is given by Fr Donagh O’Shea OP (http://goodnews.ie)

The first line of last Sunday’s gospel reading introduced “Jesus Christ, Son of God.”  Today’s readings (particularly the first, and also the responsorial psalm) show him as “Saviour”. These together were the earliest affirmation of faith in Jesus: “Jesus Christ, Son of God and Saviour,” in Greek, Iesous Christos Theou Uios Soter. The initial letters of these words taken together – ICHTHUS – happen to mean ‘fish’. And so the fish became the secret sign of being a Christian in the times of persecution. It can be seen scratched on the walls of the catacombs in Rome.

John the Baptist was a rough-cut individual, appearing from the desert, fulminating against the people, and offering a “baptism of repentance.”  We mustn’t think yet of Christian baptism.  John’s was a kind of moral baptism. They were turbulent times, and people were looking for a powerful and charismatic leader. John could be the one. The people thronged the him, wanting to signal their identification with him through a symbolic cleansing of sin: immersion in the Jordan (the word ‘baptism’ means ‘plunging’).

But John was clear about the limits of his own message. He pointed to another and greater leader to come. “I baptise with water… he baptises with the Holy Spirit” (Jn 1:26, 33).  In other words, I plunge you in water, but he will plunge you in God’s Spirit.

There is a world of difference between what we might call ‘salvation from below’ and ‘salvation from above’. Today there is a great attraction in the first: our world has countless self-improvement programmes, and many people are greatly helped by this or that one. However, there is some built-in limitation in all of these. What if I were to succeed in improving myself, according to own view? It is always in danger of being a Pyrrhic victory, because the ‘I’ that is improving itself may be entrenching itself even deeper in itself. In Zen they call it ‘polishing the tile’, after an anecdote about a monk who was attempting to turn a tile into a mirror by polishing it. The best things, we discover, are given, not produced. In Christian terms we speak of the “grace of God”. The word ‘grace’ means ‘gift’. A gift is from beyond, so I can receive it in simplicity of heart, without the ego’s double-binds. This is ‘salvation from above’. Far from excluding the other, it comes most often when the other has been taken to its limit and has run aground. If I improve myself I can experience a certain satisfaction, but when the grace of God floods me I know what is meant by joy. Joy is from beyond.

The contrast between John the Baptist and Jesus is fascinating, and the Liturgy gives us many opportunities throughout the year to study it. Jesus once said, “Truly I tell you, among those born of women no one has arisen greater than John the Baptist; yet the least in the kingdom of heaven is greater than he” (John 11:11; Luke 7:28).