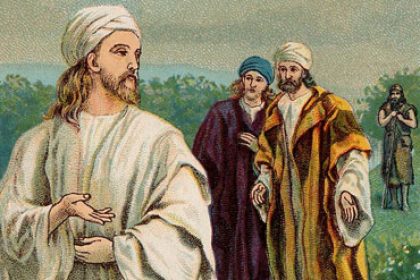 This reading is like rush-hour.  It is full of names, there are lots of people passing by, happening to bump into one another, overhearing a few words by chance.  The snippets of conversation are brief in the extreme, and practical: ‘What are you looking for?’ ‘Where are you staying?’ –  like the conversation on a crowded street.  And just like people in rush-hour they were conscious of the time: “it was about 4 o’clock.”Then suddenly, silence.  “They remained with him that day.”  There is no crowd, no consciousness of time, no account of what they talked about, no description of the place where they sat together.  But whatever happened that afternoon changed the lives of Andrew and his companion forever, and started a development that is still in process twenty centuries later all over the world.

“They remained with him that day.”  In fact they remained with him for the rest of their lives.  Their relationship to him would become their new identity, as it would become the new identity of Andrew’s brother Peter, and of their circle of friends.  We know that, but of course they didn’t know it at the time.  Nor could they know that countless others through the ages would cling to this new identity and disclaim all others.  The historian Eusebius of Caesarea described the martyrdom of a Christian in Gaul under Verus in the 2nd century.  “He endured in an extraordinary fashion all the outrages inflicted on him.  While the torturers hoped to wring something from him which he ought not to say, he girded himself against them with such firmness that he would not even tell his name, or the nation or city to which he belonged, or whether he was a slave or a freeman, but answered in the Roman tongue to all their questions, ‘I am a Christian’, Christianus sum.   He professed this instead of name and city and race and everything besides, and the people heard from him no other word.”  This new identity was the only one he claimed, and it was indestructible.

It is a fundamental question for every person in every age: which of the many identities that I claim, and of the many that are thrust on me, is indestructible?  The consumerist society identifies me as a consumer, politicians as a voter, lawyers as a client, shopkeepers as a customer, television companies as a viewer, and even football clubs as a fan….  All of these, singly, are temporary; but together they can be a great distraction from the real question: to what or to whom do I give my life?  They are the new ‘crowd’, the rush-hour that never ceases.  Like Andrew and his companion I need a quiet hour, a quiet evening, in which the Lord can ask me, “What are you looking for?”