4. Synod on the family. Path to marriage fullness

4. Synod on the family. Path to marriage fullness 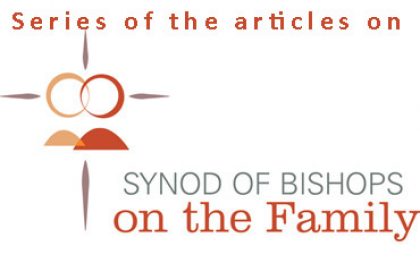 With apologies for delay due to health problems

This is the fourth of six articles dealing with items on the agenda proposed for the Synod of Bishops which aims to strengthen Family Life and which is being held in Rome, October 4–25, 2015. In preparation for this Synod of Bishops a previous Synod held in October 2014 also discussed Family Life. The official report of that first Synod was published as the Working Document for the 2015 Synod and called Instrumentum Laboris. This series of articles is intended to give a brief selected synopsis of points in this Working Document.

This section of the Study or Working Document for the 2015 Synod of Bishops, the Instrumentun Laboris, treats of the path or way that leads to the fulfilment of the complete vocation to family life and not just hitting some points in spots occasionally. It also provides for further study on several valid elements in the natural marriages endorsed in many non-Christian religions (for example indissolubly, stability and fidelity, etc.). What is also common to these groups is that all recognise man and woman as having been created by God and the special relationship with him as a consequence. The fullness of the vocation to marriage and family life has to be the Sacrament of Matrimony as this has been established directly by Jesus. It would be a responsibility of the Church and its members to encourage such a development to occur according to the grace of the Sacrament.

Here is a second point that seems to be very close to the mind and heart of Pope Francis. He has brought it up on quite a few occasions. As an interesting aside, perhaps the points enunciated here regarding young people being slow to marry could be applied also by experts to the shortage of vocations to religious life and priesthood.

These next paragraphs are taken directly from the Study Document. “When considering the prospect of marriage, many young people are afraid of failure. Consequently, more attention needs to be given to discerning the underlying reasons for their renunciation and discouragement. Indeed, some think that, in many cases, the reasons might have to do precisely with an awareness of a goal which — while appreciated and no less desired — seems incommensurable in reasonably evaluating one’s strengths or might arise from a grave doubt about the constancy of one’s feelings. As for fidelity and stability in a loving relationship, which, nevertheless, still remain desirable, some young people feel an anxiety — or even anguish — at not being able to ensure fidelity and stability in love, which often causes them to renounce marrying. Such difficulty, though in itself surmountable, is referred to as proof that fidelity and stability in love is radically impossible. In addition, sometimes aspects of social convenience and economic problems related to the celebration of marriage have an impact in the decision not to marry.

“In this regard, a new aspect of family ministry is requiring attention today — the reality of civil marriages between a man and woman, traditional marriages and, taking into consideration the differences involved, even cohabitation. When a union reaches a particular stability, legally recognized, characterized by deep affection and responsibility for children and showing an ability to overcome trials, these unions can offer occasions for guidance with an eye towards the eventual celebration of the Sacrament of Marriage. Very often, on the other hand, a couple lives together not in view of a possible future marriage but without any intention of a legally binding relationship.

“In accordance with Christ’s mercy, the Church must accompany with attention and care the weakest of her children, who show signs of a wounded and lost love, by restoring in them hope and confidence, like the beacon of a lighthouse in a port or a torch carried among the people to enlighten those who have lost their way or who are in the midst of a storm. Conscious that the most merciful thing is to tell the truth in love, we go beyond compassion. Merciful love, as it attracts and unites, transforms and elevates. It is an invitation to conversion. We understand the Lord’s attitude in the same way; he does not condemn the adulterous woman, but asks her to sin no more (Jn 8:1-11).”

A third point that is most important is the relationship between man and woman and the Creator. Christians believe that God created the world and everything in it. On the sixth day he created the human being in God’s own image and likeness. God is pure spirit and so does not have a body. This is a clear indication that the human beings were created in the image and likeness of God. They are not identical but they are complementary, each supplying what is necessary in the other and receiving what the other has that is required. It takes two human beings to create, one male and the other female.  Neither has all the elements that are necessary.

Finally, the Christian community might also display a friendliness to couples in difficulty through the nearness of those families who are actually living a Christian marriage. The Church draws near spouses who are running the risk of separation, so they can rediscover the beauty and the strength of their married life. In cases of a painful end to a relationship, the Church feels the duty of being close to these people in their time of suffering in such a way as to prevent disastrous conflicts between the spouses and, above all, to minimize the suffering of the children.